Conference on the Transatlantic Trade and Investment Partnership

Together with the Centre for European Research (CERGU) at the University of Gothenburg, Guri Rosén at ARENA co-organises an interdisciplinary conference on the TTIP in Gothenburg on 14-15 March 2016. EU Trade Commissioner Cecilia Malmström will hold a keynote address. 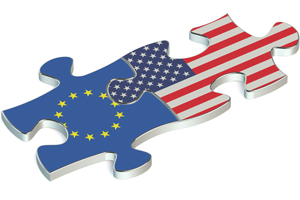 The interdisciplinary conference deals with the Transatlantic Trade and Investment Partnership (TTIP) between the EU and the US that is currently under negotiation. On the one hand, many appraise the positive effects of TTIP, which is expected to increase the EU economy by billions of Euros and create several hundred thousand jobs. On the other hand, given its broad geographical coverage and its comprehensive scope the prospects of an EU-US trade deal have attracted significant criticism.

This conference aims at enabling a dialogue between research and policy on pertinent issues for a Swedish, European and international community. One ambition of the conference is to gather scholars from the fields of economics, law, and politics to exchange views and provide different perspectives on common issues. However, the event also engages policy-makers, practitioners and business representatives from multinational corporations and SMEs. The panels are going to cover topics reaching from the broader effects of TTIP, its political and economic dimension to particular policy fields such as issues of regulatory cooperation and investment protection, including the proposed investor-state dispute settlement. Moreover, addressing issues related to global governance and inviting third-country perspectives on TTIP, this event attempts to take a global perspective beyond the EU-US policy domain.

For more information and registration, visit the conference website.

The conference is hosted by the Centre for European Research at the University of Gothenburg (CERGU).

It is organised by Guri Rosén, Guest Postdoc in Political Science at CERGU and postdoctoral researcher at ARENA Centre for European Studies, University of Oslo and Hannes Lenk, Doctoral Candidate in Law, University of Gothenburg.

The Conference is supported financially by Vetenskapsrådet, the Swedish Network for European Studies in Political Science (SNES), and TDM Transnational Dispute Management.