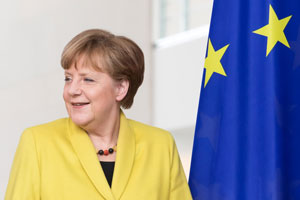 Should Germany have a leading role in the EU? (Photo: Colourbox.com)

A series of crises are afflicting the European Union (EU), and several of its institutions are creaking at their seams. This not only applies to the Schengen agreement on border control and the Dublin agreement on the registration of asylum seekers, but also regulation of the eurozone. The truism is that crises create more integration. The EU will emerge strengthened by the crises through the establishment of new mechanisms for resolving problems and conflicts. Although this has been the case in the past, there is no guarantee that it will be so in the future. Now the crises are numerous, and they also reveal the weaknesses of the EU structure.

The public discourse in Europe reflects a progress from when Blair's government claimed that 'cheap holidays' were one benefit of EU membership.

With regard to what the EU is good for, the public discourse in Europe reflects that one has progressed somewhat from when Tony Blair's government, in its White Paper on the Constitutional Treaty claimed that 'cheap holidays' were one benefit of EU membership. Under the headline 'Bravo Brussels', the German Handelsblatt on 20 October listed ten good reasons to love the EU: Freedom of movement that has established a free labour market, competition law that can harness even giants such as Google and Gazprom, lower roaming fees in the EU for mobile phone calls, the Erasmus programme for student mobility, the EU's role in international peace negotiations, EU law as a guardian of fundamental rights, the internal market that is estimated to have led to approx. 20 per cent higher gross domestic product for the member states. In addition there is the EU's progressive environmental policy and better banking and financial supervision mechanisms.

It is obviously difficult to envision what would have happened in Europe without the EU. However, researchers claim that the integration process saved the national states following the World War II, because it gave them a stable and foreseeable framework for development. Power rivalry and mutual distrust were replaced by institutionalized cooperation. The states have voluntarily ceded sovereignty to a supranational institution in order to secure peace and cooperation. The EU treaties constitute an overarching legal structure, which in turn serves to limit member states’ sovereignty.

In the event of conflict between states, state actors are bound by these treaties to seek solutions at the EU level and not through intergovernmental brokering. This has meant that European states’ own exclusively national means of reciprocity and self-help measures have been removed. The states cannot take the law into their own hands. They are not themselves permitted to sanction breaches to agreements, but must refer to the European Court of Justice.

The EU has domesticated international relations and ended the might-makes-right state of affairs in Europe.

European actors then do not take action through threats and power, but through a system of institutions and procedures which coordinates interests and makes binding decisions. The states govern themselves jointly through the Council. Citizens have direct influence on the EU's legislation in that the European Parliament has right of co-determination with the Council. To an increasing degree, the Parliament holds the European Commission accountable.

The EU has domesticated international relations and ended the might-makes-right state of affairs in Europe. The states have ceded sovereignty, but have in return been given the right of co-legislation in common affairs. In Europe it is the states and citizens who jointly decide what applies. The major powers must accept coming together in the EU before implementing their will.

There are of course numerous exceptions to this principle. The EU's foreign policy is formally intergovernmental, i.e. the states have the right of veto, and EU law only applies to the extent of the treaties. So when the financial crisis required attention, and one failed to find a solution through the established body of treaties, the major powers came into play. Germany, which is the largest economy in the eurozone, had the final say. As the crisis in the eurozone remains unresolved, as Greece remains under administration, this demonstrates the weakness of the established structure.

Something has to be done, but who will be able to take action?

The EU not only lacks resources, competences and instruments of power, but also legitimacy. However, there are a number of issues affecting Europe's citizens that need to be resolved. These concern transnational problems such as refugees, climate and the environment, international crime and terrorism and tax evasion. Something has to be done, but who will be able to take action? There are three alternative strategies.

How to solve them

The first that springs to mind is to give the largest and financially strongest country – Germany – a leading role. But even though Germany has been instrumental in creating EU's internal market and the euro, and benefits from them, this do not amount to a moral obligation that is recognized as legitimate and binding. The question of responsibility and blame is unclear, and there is more than one reason for the current state of despair. Additionally, because it would mean that one country would dominate Europe, the solution is not to give Germany such responsibility and such a role. Germany as leader is also impossible for historic reasons. The German objective with the European integration process was not a 'German Europe', but rather a 'European Germany', as Thomas Mann put it.

The second strategy is a renationalization, i.e. that the states regain their sovereignty and that competences are returned to the national states. This route too is a dead end. Not only because it would be inefficient and costly. This strategy is also problematic because there is no international order to fall back on; there is no status quo ante. The situation would be similar to a revolutionary state. The states would have to renegotiate their international relations and rewrite their constitutions. Dismantling the EU will entail more power politics and an uncertain state in Europe. The societal, social, economic and political consequences of a collapse of the EU are unclear and potentially catastrophic.

The social, economic and political consequences of a collapse of the EU are potentially catastrophic.

The third strategy is thus to reconstitute the EU. In its current form the Union is not capable of solving its tasks. The EU must be reformed. This will entail proceeding with the integration project by changing the treaties and bringing the eurozone arrangements into EU's body of treaties. Reform means more resources and competence to the EU. This is necessary because many of the problems the states are facing require European solutions. The refugee crisis cannot be resolved by individual countries, as this will lead to an even greater humanitarian disaster and to an unfair sharing of the burden between the countries in Europe. The environmental and climate crisis requires supranational action, because little will be done unless everyone is subject to the same obligations. In the security policy area the relationship with Russia has come to a head, and so has international crime and terrorism.

The problem today is that the EU faces a number of crises in its environs, while the Union itself has its own internal problems. These are the danger of Brexit, increased xenophobia and EU scepticism, the collapse of the Schengen and Dublin cooperation and the unresolved crisis in the eurozone. When this is all going on at the same time, it is difficult to achieve coordinated action. Simplistic solutions and national egotism are allowed to blossom. Renationalization as a problem-solving strategy is gaining support. It is therefore not obvious who will control Europe in the future.