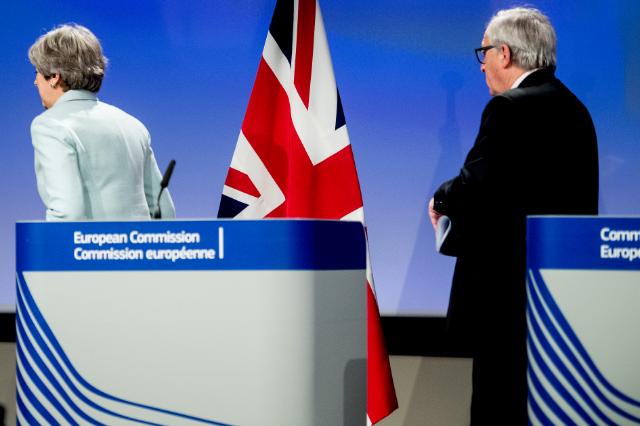 Prime Minister Theresa May and European Commission President Jean-Claude Juncker leaving a press conference. The negotiations beetween the UK and the EU have been difficult these last couple of weeks. (Photo: European Commission, 2017)

The UK and the EU-27 have now reached enough agreement to move on to the next phase of negotiating Brexit. Yet nothing better illustrates the fragility of that agreement than the manner of making it. No sooner was the agreement concluded than David Davis (otherwise known as ‘the Secretary of State for exiting the European Union’) told British television that it was merely a ‘declaration of intent’.

Others – including the President of the largest group in the European Parliament, which has a veto on any withdrawal agreement – have replied that what has been agreed so far must be understood as commitments that could be included in a legally binding agreement if, indeed, the aim is to reach such an agreement at all.

Whilst, though, the main actors struggle endlessly over the meaning of Brexit, there are several “known unknowns”.

The unknowns of British politics

The 2016 referendum did not specify how the UK should leave.

The unknowns of negotiation

Second, are unknowns of negotiation. The UK is unlikely to negotiate any deal with the EU that improves of its current membership of the Union. As a member state the UK was remarkably successful in developing its own private form of membership.

The UK will discover that it is structurally harder for non-members to participate selectively in Union policies and institutions from the outside than it is for members to abstain selectively from the inside. Member states have formal veto powers. They can insist on selective rights of non-participation as a condition for not vetoing treaty changes. Moreover, even where their membership is full of exceptions, full members remain nested in the Union’s overall authority relations. They can grant one another exceptions of infinite and dazzling complexity precisely because they are mutually committed to recognise the ultimate supremacy of a shared treaty, law and court in adjudicating where those exceptions begin and end.

As a member state the UK was remarkably successful in developing its own private form of membership.

The unknowns of European damage

The unknowns of failure

We have typologies for how Brexit might work: the UK can be Norway, Switzerland, Canada or Singapore.

Fourth are the unknowns of failure. We have typologies for how Brexit might work: the UK can be Norway, Switzerland, Canada or Singapore.

But we lack typologies of how Brexit might fail. One possibility, is that Brexit fails in one of the ways predicted by those who opposed it throughout. Thus Brexit could damage the UK’s trading relationships; strain its public finances and public services; and divide a country whose political system is fashioned for intense political competition, not for the reconciliation of differences, which, in the case Brexit also divide generations, as well as England, Wales, Scotland and Northern Ireland.

...the art of failing is, of course, to disguise it as success, or, at least, cover it up by delaying and diffusing its effects.

The art of failure

However, the art of failing is, of course, to disguise it as success, or, at least, cover it up by delaying and diffusing its effects. There are two ways – not necessarily mutually exclusive – by which failures of Brexit might be covered up.

First, through transitional arrangements. The British Government has accepted that a transition would have to be a ‘standstill’ if businesses are not going to have to adapt twice to Brexit. Indeed, the most plausible way of giving a transition a legal base would be to use a withdrawal agreement agreed under article 50 to commit the UK by treaty to all its present commitments for a period after leaving.

At the moment it suits everyone to pretend that such a period of ‘membership without membership’ – of commitment to all the obligations of membership without any participation in institutions and decision - would only be for a two years. But, in practice, a ‘frictionless’ transition would have to be just as long as it takes to arrange alternative customs procedures, to negotiate whatever ‘deep and meaningful’ trade arrangement is supposed to substitute for EU membership and so on.

...remaining within the orbit of the European Union would not be leaving it.

As Boris Johnson has put it, remaining within the orbit of the European Union would not be leaving it. Nor is the problem limited to a transition. Even after a transition the UK could find itself unilaterally approximating Union policies and laws. Of course, even unilateral approximation can be the decision of a free and sovereign democracy in full control of its own laws. But it can also be the result of pressures on smaller players in the international trading system to adapt to rules set by larger players.

If, it is by constraint rather than choice that the UK ends up following the very Union policies and laws it has supposedly left, unilateral approximation of Union laws will, at best, be a way of disguising a soft Brexit as a hard Brexit: of  avoiding any need for formal membership of the single market and customs union by voluntarily approximating both as closely as possible.

...unilateral approximation of Union laws will, at best, be a way of disguising a soft Brexit as a hard Brexit.

But, it would be a failed Brexit all the same. Indeed, it would be the worst kind of failure. It would be a lose-lose Brexit. Remainers would lose the advantages of EU membership. Leavers would lose the promise of regaining control of laws from Union institutions. Worse, they would lose all that at the hands of those claiming to represent them – and to be delivering their mandate from the June 2016 referendum.