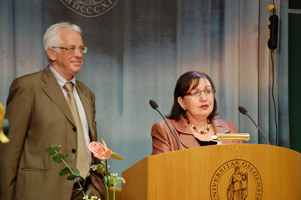 The immediate, politico-practical background for the invitation of Seyla Benhabib to Oslo is twofold:

First, the horrific terrorist attack on the government building and the political youth camp 22.7.2011 causing the death of 77 people, leaving a whole country in shock. The terrorist justified his actions with reference to the takeover of multi-culturalism in Norway. It may be that the person is mentally ill, but the ideas he refers to, of national purity and Christian supremacy, thrive among right wing extremists and xenophobic groups.

This connects to the other politico-practical reason for inviting Benhabib:  In contemporary Europe, the cosmopolitan view that the ultimate units of protection are human beings, or persons, not groups, not cultures and not states; that every living human being is equal and that this special status has global force, has been challenged by nationalist and xenophobic movements. The vision of an open society of difference, rights and justice that is defended by supranational political arrangements is often identified as an elite project which meets popular resistance.

According to the Universal Declaration of Human Rights, Preamble, Article 2, all persons 'without distinction of any kind, such as race, color, sex, language, religion, political or other opinion, national or social origin, property, birth or other status' are entitled to dignified treatment regardless of 'the political, jurisdictional or international status of the country or territory to which a person belongs.'

Current developments in European integration linked to populist backlashes, Euroscepticism, Islamophobia and most recently also rightwing fundamentalism and violence have challenged our understanding of cosmopolitanism as an irreversible process. These developments are effectively sponsored by the financial, economic and social crisis in the eurozone and the political impotence in dealing with it. How can we cope with difference and pluralism in a just manner? Can societies reverse their own learning processes? And, are cosmopolitans ‘dead souls’; universalists out of touch with ordinary citizens and their concerns?

Who could be better positioned to guide us in these matters than Seyla Benhabib who so nicely navigates between the demands of the generalized other and those of the concrete other, between universalism and particularism in her works. Here we discover a great sensitivity to cultural difference, and her cosmopolitanism is the vision of ‘another’ universalism than western Eurocentrism or hard nosed rights politics – hers is justificatory universalism. Her position is unmistakably close to the modern Frankfurt one (Habermas), and it is one premised on 'the rights to have rights' (Arendt). Human rights straddle that line between morality and justice, they enable us to judge the legitimacy of the law. Human rights articulate moral principles protecting the communicative freedom of individuals.

A place for cosmopolitanism?

So what is then cosmopolitanism? Is there a basis for such a doctrine in the present situation where we on one hand see the emergence of a narrow nationalism and xenophobic movements and on the other hand an imperialistic neo-liberal empire of unfettered marketisation? Is there then an alternative to the soulless despotism of a world state that Kant warned against?

Benhabib’s innovations involve distinguishing between the principle of rights and the schedule of rights, and she sees an intrinsic connection between human rights and democratic self-determination. Conceptual innovations like jurisgenerativity - the law’s capacity to create a normative universe of meaning that can often escape the ‘provenance of formal lawmaking’ to expand the meaning and reach of law itself;  and democratic iterations are contributions to the development of the discourse-theory of law and democracy.
Democratic iterations is meant to describe how to describe ‘how the unity and diversity of human rights is enacted and re-enacted in strong and weak public spheres, not only in legislatures and courts, but often more effectively by social movements, civil society actors, and transnational organizations working across borders.‘ (Dignity in Adversity:15)

Benhabib is skeptical to a world state for the protection of human rights, and puts her trust in civil society mobilization supported by a new global order – complementary to republican federalism. Hence, ‘(t)he interpretation of basic rights is a political, not a legal, project’. There can be ‘no cosmopolitan rights without contextualisation and articulation through self-governing entities.’ (Dignity in Adversity: 12) In other words:
no humanisation without representation!

Benhabib is very sensitive to the impact of historical experience. But then she also has an interesting background, from Istanbul, to Yale (PhD), to Frankfurt (habilitation with Habermas), to Harvard, to Yale. She is born in Istanbul of Jewish parents, educated in USA and Germany and currently is the Eugene Meyer Professor of Political Science and Philosophy at Yale University.

Listen to a podcast
from the lecture here.