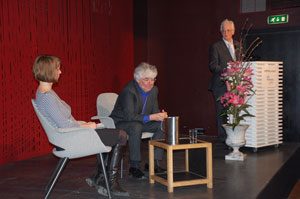 The journalist and historian Geert Mak held the ARENA lecture 2011: “Europe and the USA: two unique historical experiments at a crossroads” at 'Litteraturhuset' in Oslo on February 16. This was Erik O. Eriksen's introduction:

It was in Europe the nation states were invented - an invention with horrific consequences. The clashes between nations in the two world wars bear witness of its explosive potential and of the shortcomings of the so-called Westphalian order. The nation-state produces externalities for others that it is not held responsible for – and in a way it is not illegal to wage war.

There is often talk about benign nationalism, especially in this country, and of course a small country can afford to be inward looking and nationalistic, but we should not forget that the nation-state is a potentially warmongering system that needs to be constrained and checked. Nationalism pits us against them, it leads to homogenization of populations, to  exclusion and the suppression of minorities. Nationalism makes democracy into a ‘community of fate’ that egoistically governs itself – without much concern for others’ interests and rights.

Europe may have invented the nation state and experienced the most horrific consequences of it, but it is also the place which have come further in transforming and containing it. A new political order has emerged in Europe, and one which has transformed the Westphalian order. For the first time in human history, we witness the development of a political order that respect the identities of the parties that constitute it. Neither is the EU based on the idea of a culturally homogenized people, nor brought about by brute force. The European integration project testifies to the fact that it is possible to learn from catastrophes.

This project has had its ups and its downs, and has its protagonists and critics. One is however struck by the lack of intellectual involvement in the debate over its destiny. It is left in the hands of specialists and a special branch of researchers (– and of politicians of a dubious quality). This is sad, because this project is utopian – it should be attractive for political thinkers and social movements. The EU has brought to the fore the question of whether post-national democracy is possible. The question is whether we are now witnessing the third transformation of democracy—to a post-national form—succeeding the transformations to the city-state and to the nation state?

However, the EU is also theoretically puzzling – how on earth is it possible? The European Union does not control a given territory; it lacks a collective identity; truly supremacy and hierarchy; it lacks powerful enforcement means. It is the member states that hold the means of violence in reserve.

By reading Geert Maks book ‘In Europa’, what is a theoretical puzzle dissolves in front of our eyes. The book is a tremendous tour de force through Europe’s history and landscape over the last hundred years. It documents what nationalism (and racism that goes with it, and if I may add, stupidity and plain fraud), has created of mass-destruction and bloodshed. The two world wars would not have happen with a powerful European Union in place. Europeans may now have learned, but it is a hard won lesson and it is one that dates back in history.

Historians have found no fewer that 182 European unification projects  - between 1306 and 1945. Why did it take so long, and why is it still so feeble and shaky in its foundation? (as we can read every day in the newspapers). We will learn more about its shaky foundation in this lecture. Again we see the sentiments of nationalism at the political scenes in Europe, and also with regard to the Union – more power to the EU means less to the member-states – but it was their disastrous actions that first created the need for the integration process, for the EU. Democracy in one country is not possible.

Art is not possible after Holocaust, claimed Theodore Adorno, but how is it possible that xenophobic and chauvinistic political leaders again get a foothold in Europe, we may ask. Geert Mak has now followed Alexis de Tocqueville, and, in the footsteps of John Steinbeck, travelled the USA, off main street. There is a lot to learn from the history of the European integration process, but it is always necessary to adjust the interpretative/evaluative scheme. USA represents an illuminating assessment standard for Europe whether we like it or not.

The ARENA Lecture has been a tradition at the University of Oslo for some years. The Lecture is set up by ARENA Centre for European Studies, which invites politicians and other influential persons to give a public lecture on a topic that is both academically interesting and of genuine public interest.

Geert Mak was born in the Dutch city of Vlardingen, close to Rotterdam, in 1946. His father served as a Protestant clergyman in the province of Friesland; the family also lived for a time on the Indonesian island of Sumatra.

Mak has worked as a journalist in the weekly De Groene Amsterdammer, Dutch TV and the  “Liberal Protestant Radio Broadcasting Company” and the daily newspaper NRC Handelsblad.

As from 1992 he has dedicated himself increasingly to the writing of books… some journalistic, some more historical in nature. His book from 1999: “My Father’s Century”, which has since sold more than 500,000 copies, is a history of the Netherlands in the 20th century, closely interwoven with the story of his own family, reconstructed with the use of letters, postcards, interviews and other material.

This interwoven-ness between people’s personal experiences linked with both sudden and incrementalistic developments in history has proved to be a trademark for Geert Mak’s writings and a door-opener for his texts for a broad international public. The book “In Europe” from 2004 was his international breakthrough in that regard. The book is an account of a journey across the Europe both in space and time: day after day, readers were able to follow the story of European history from the year 1900 - 1999, embellished with countless local observations and interviews with eyewitnesses. Later this book has been the basis for a TV-series which also has been broadcasted in Norway during 2010.

Geert Mak is a genuine renaissance man or a Homo universalis. Besides his studies in law and sociology, he has been extraordinary professor of urban issues at the University of Amsterdam. He has twice been awarded the title “Dutch Historian of the Year” and has received an honorary doctorate from the Open University of Heerlen for his achievements in historiography. In 2008 he won the prestigious Leipziger Buchpreis zur Europaische Verstandigung for his book In Europa and in 2009 the French government awarded Geert Mak the title Chevalier de la Légion d’Honneur for his personal achievements, his writing talent and for In Europa’s contribution to the process of European unity.

Last Fall, Geert Mak and his wife was travelling in the United States. It is based on his meetings, experiences and reflections during this trip that he now will give an account of his images of Europe and the USA and the crossroads we all may find ourselves in today.