Democracy at a discount 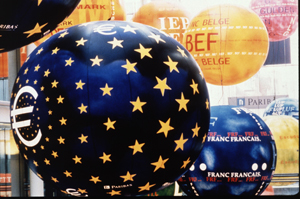 The temporary rescue funds (EFSF) are established outside of the Lisbon Treaty and the Stability and Growth Pact. The funds are set up as a voluntary loan agreement among the eurozone countries. It is thus an intergovernmental, ad-hoc arrangement and it is the above-mentioned troika, which ensures that the measures are implemented.

Never been voted upon

These institutions have never been voted upon. Also the French President Nicolas Sarkozy and German Chancellor Angela Merkel lack a European mandate. Nevertheless, these and others heads of governments have agreed upon a series of financial, economic, social and wage policies that affect the well-being of very many Europeans. Such issues belong, according to the Lisboan Treaty, to the remit of the member states.

When Giorgios Papandreou opts for something as obvious as a referendum, it resulted in an outcry. Why could not the citizens express their opinion, even if this only meant a choice between two evils, between plague and cholera? The citizens could not be allowed a say because doing so takes time. Greece would be bankrupt before the referendum could be carried out. Insecurity and falling stock markets would push interest rates upwards. It would ruin banks and undermine state finances. Probably also Italy would be on the verge of bankruptcy before the Greeks could have settled the case. Therefore it is not only the Greek citizens who should participate in a referendum, but in addition also Italian and all other European citizens.

The crisis affects all Europeans and beyond. Democracy requires that all affected parties can be heard. All those subjected to the law should be allowed to have a say in its generation! It is the European Parliament and a European-wide referendum that are the right institutions for the management of the eurozone crisis.

The European political architecture is in many ways impressive. It is an attempt to politically catch up with the economic globalization. The supranational institutions that have been established – a parliament, a council, a court and an executive commission – can decide upon common European problems. The only problem is the lack of competencies in the most important fields. EU has no competence in fiscal policies, cannot redistribute resources, issue state bonds, print money and it has no sovereign tax basis. All this belongs to the competency of member states.

EU is not a state. It does not have the necessary capabilities and resources to act as one, even though this could be needed these days. EU does not function as a lender of last resort of government debt and does not possess the requisite power in the sphere of finance to support the central banks’ market interventions.

With his initiative, Papandreou has put democracy on the agenda and demonstrated what is now at stake. He has forcefully made clear the fact that the management of the eurozone crisis is a battle over what should have the upper hand: Economics or politics? Capitalism or democracy?

The article has also been published on EUobserver.com and in the Greek paper Eleftherotypia.