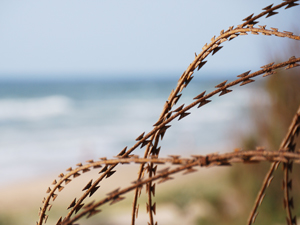 The Refugee Convention is incorporated in EU law and is to guarantee that everyone entitled to protection shall have her case tried (illustration: colourbox.com)

With the new wave of refugees, the illusion of a European paradise is gone, that of a free, prosperous and safe area far away from the world's suffering and injustice. Europeans can no longer close their eyes to the world's atrocities, or pay to get rid of them by means of aid and charity.

There are different ways to face the refugee situation. Germany, where the Western Germans pay their solidarity tax after reunification (Solidaritätszuschlag), has proposed an increase in fuel taxes to alleviate the refugee situation. At the same time, Denmark decides to confiscate refugees’ valuables and Norway is reprimanded by the UNHCR for its hard line.

One may wonder how it is possible to score political points in some of the world’s most prosperous countries by conducting the strictest refugee policy in Europe. We are talking about helping those fleeing war and barbarism as well as showing solidarity with other countries in Europe welcoming many more refugees. How can it be that one day Norwegian media outshines each other in their descriptions of the terrible suffering of refugees, invoking everyone’s responsibility, while the next day the same media, trembling with rage, asks the government why no measures have been implemented to stop the influx?

This is not only due to double standards, but also how the world is screwed together. We see two logics colliding; morality and political realism, supported by a mediatised public. Everything that we know, we know from the media, and public opinion is changing. One day retrenchment and closed borders are required, while the next day people are walking in the streets to support refugees’ rights. Public opinion is not only divided, it is also in flux.

A duty to help

When accidents hit and people need help, one question quickly arises: How would we expect to be met by others in the case of a disaster? Kant’s categorical imperative is brought into effect; one should act as if the norm for our actions could be made into universal law. This morality is reflected in the golden rule of Christianity and other religions; one should treat others like one would want others to treat oneself. We also have a duty towards strangers. We comply with moral imperatives not only out of duty, but also because we cannot want to live in a society where these are not complied with, where people in need are not being helped. Kant, however, saw this obligation limited to hospitality and the right to visit for distressed people from other countries. This is reflected in the current asylum arrangements that do not give refugees a right to permanent settlement. Kant was also concerned with borders and the state’s responsibility for its own citizens. The individual may say for himself: ‘Fiat justitia, pererat mundus’ (let justice be done, even if the world perishes), but the state has no right to say so in the name of those who are in its care.

We have an obligation to help people in need.

A state is responsible for the integrity and welfare of a defined group – it is this group that authorizes its use of force. Politicians can only act morally as long as it does not conflict with preserving the integrity of the political community. But for how long can this realpolitik credo be allowed to serve as an excuse for not taking action? We have an obligation to help people in need. Our sense of justice and our conscience tell us so. It is a moral imperative that the egoism of the nation state is set aside.

Moral principles are given collective power through the public use of reason. The public is a sensor that warns tragedies, abuse and bestiality. When the subject matters are tried against moral standards, no unfounded discrepancies, undeserved misery and injustice are tolerated. Morally relevant issues often become visible to the public only when they are reflected in the suffering of individuals. When a dead boy is flushed up on a Mediterranean beach, alarm bells are ringing. The whole media world reacts, there is a wake-up call. Something must be done! However, so-called realists can argue that as long as there is no overarching, international authority to enforce mutually binding initiatives, nation states have no other choice but setting the state’s interests first. Is this right?

The limits of the state

Since the 1648 Peace of Westphalia, founding the world order on respect of the borders and sovereignty of the state, globalization and trade across countries and continents have grown exponentially. Human rights have been given a legal basis in the UN Charter. Today, everyone has rights, no ‘lawless’ areas are left. Furthermore, a legal authority above and binding the nation state is in place. Taking into account the international legal development and institutionalization of decision-making bodies in place to interpret and implement rights above the nation state, such as the EU, one is also struck by the limits of the state. It is sovereign only as long as it complies with human rights.

A state is sovereign only as long as it complies with human rights.

The EU’s fundamental principles are the freedom of movement, non-discrimination and respect for human rights. The Refugee Convention, which guarantees that everyone entitled to protection shall have her case tried, is incorporated in EU law. Therefore, no country can introduce quotas for how many refugees (asylum seekers) it will accept. Austria and other countries that say they will do so, are violating EU law. So do the countries refusing to welcome foreigners, non-Christians, such as Hungary and Poland. It is puzzling that we demand respect for our values from the immigrants, while there is infringement of them by Europeans today.

Those who make themselves as unattractive as possible to those who are entitled to protection, act egoistically and are even in danger of breaking their own principles. Human-rights protection is not only part of international conventions, but also of national constitutions, including that of Norway. Europeans are in fact not allowed to close their borders and put up fences against refugees. Yet, this is happening, at the same time as we see increased bestiality in areas controlled by the Islamic State (IS).

Europeans are in fact not allowed to close their borders and put up fences against refugees.

The refugee crisis that has hit Europe so fiercely can be compared to the fall of the Wall. It is costly and will change our societies for good. To prevent new forms of bestiality, most realize that European solutions are required. It is a common European responsibility, not only German and Swedish. The latter countries are moreover forced to introduce inhumane measures unless all countries are prepared to take responsibility. An ‘immigration Europe’ challenges our self perception, our collective identity, but also our sense of responsibility.

One could also ask what would happen with the four freedoms that the EU is founded on, if Schengen were to fall. Is the entire internal market put at risk, a market that has increased the member states’ gross domestic products by about 20 percent, if all European states were to introduce permanent border controls? What would happen in the Middle East and with the barbarism unfolding in Syria and Iraq every day, if collective European efforts were to stop? What would happen with Greece and the Balkans if the EU were to dissolve? The uncertainty and insecurity Europeans feel today is a mere trifle compared to the possible future scenarios.