Public research & development (R&D) subsidies are costly. In our article Public R&D support and firms' performance we show that such subsidies do have a positive effect on Norwegian firms. However, the effect differs between different subsidy programs and affects start-ups and incumbents differently.

The limited amount of subsidy programs, the long length of the analyzed period (2002-2013) and the possibility to link policy instruments with firm level data makes this study unique compared to existing literature.

How to measure effects of R&D support?

The effectiveness of public R&D support programs has been analyzed in many prior studies. A survey of some early firm-level econometric studies is given by Klette et al. (2000), with focus on the problem of establishing a valid control group. While the early literature is hampered by methodological flaws (see David et al., 2000), the more recent studies are generally aware of methodological challenges. Examples include: Czarnitzki and Licht (2006) (German firms), Cappelen et al. (2012) (Norwegian firms), Lokshin and Mohnen (2013) (Dutch firms), Dumont (2017) (Belgian firms), and Dechezlepretre et al. (2016) (UK firms).

Building on the existing literature, we estimated the effect of public R&D support by means matching: firms that received support were matched with a control group of firms that did not receive any support, using a combination of stratification (by industry, firm cohort and region) and propensity score matching (within each stratum). We then compared changes in performance indicators in the treatment group -- before and after support -- with contemporaneous changes in the control group.

Public R&D support programs have effects - but there are caveats

The table below shows estimated average effects of 1 mill. NOK in R&D support for each main policy instrument, with separate estimates for incumbents and start-up firms (start-up: maximum 3 years old at project start).  The main results are: 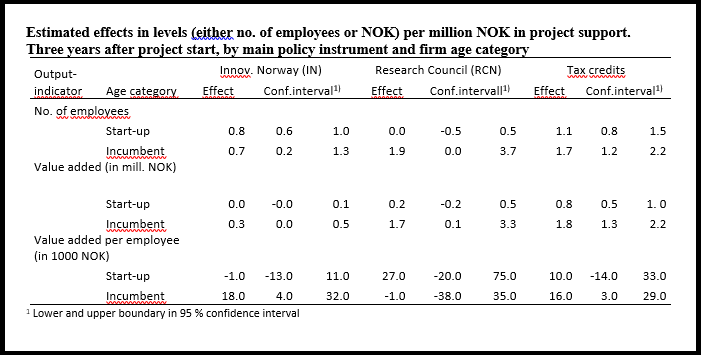 To sum up: the average effects of R&D support among those who obtained grants and/or tax credits are mostly positive and significant for incumbent firms. Among start-ups, neither support from IN nor from RCN contribute significantly to value added or labor productivity growth, although the effect is significant w.r.t. value added for a typical start-up firm receiving tax credits: the estimate is 800 000 NOK in increased value added during 3 years per million NOK in funding.

These modest, or even negative findings with regard to public policies supporting start-ups are consistent with various existing studies; both Norwegian ones (see the Auditor-General’s evaluation of public seed capital funds; Riksrevisjonen, 2016) and international (see Acs et.al., 2016; and Astebro, 2017). On the other hand, Hottenrot et.al. (2017) find that subsidized start-ups have higher probability of attracting bank funding than non-subsidized ones.

This evidence indicates that public financial instruments may trigger additional private financing, but that the effects in terms of increased value added and productivity are weak.

More research is warranted to inform public policies on how – or whether -- to stimulate R&D and innovation among young firms in particular.

Astebro, T. (2017): The private financial gains to entrepreneurship: Is it a good use of public money to encourage individuals to become entrepreneurs? Small Business Economics, (48), pp. 323–329.