Container ships are getting ever bigger. Social anthropologists show in a new article that such growth is not financially, ecologically or socially sustainable. 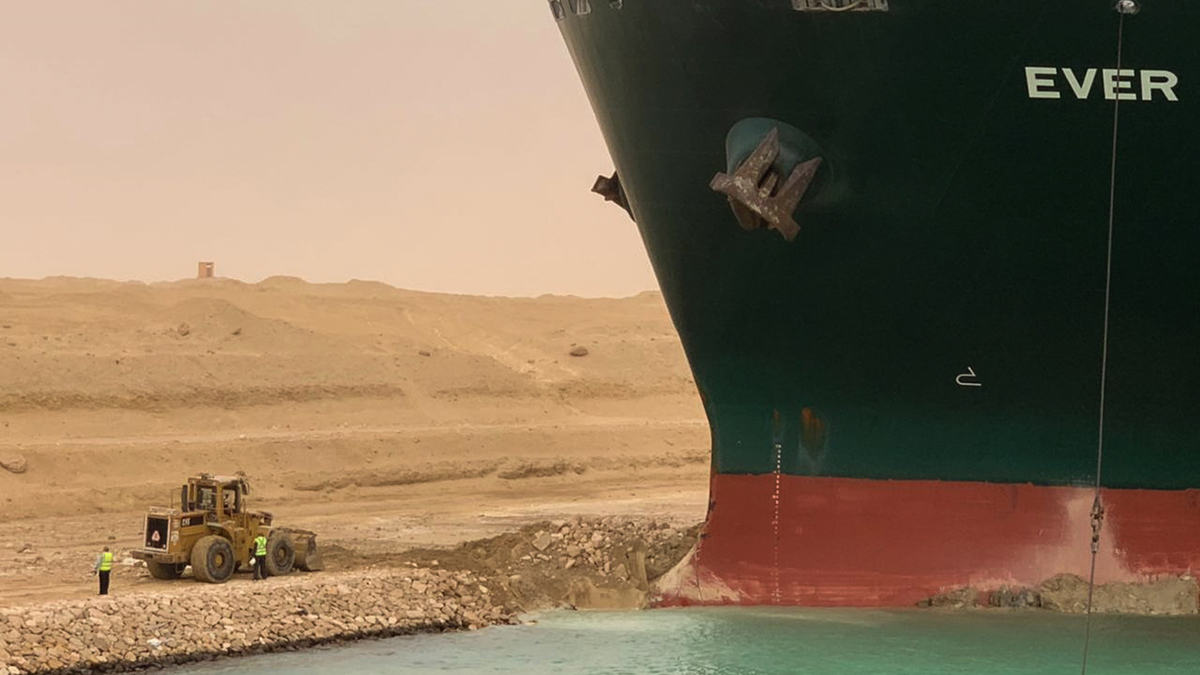 Stuck in the Suez canal: After six days of digging the ultra-large containership Ever Given was towed clear by tugboats. Photo: Suez Canal Authority / NTB

Some images simply remain fixed in our minds. Such as the excavator by the side of the container ship stuck across the Suez Canal back in March. The little yellow machine was trying to dig the towering bow free, while two men in hi-vis vests on the bank were simply dwarfed.

How big are modern container ships?

Where the Ever Given got stuck, the Suez Canal is between two and three hundred metres wide. The ship is four hundred metres long, and with a capacity of 20,000 containers, is an ultra-large container ship.

"What happened in the Suez Canal was in many ways a worst case scenario. I didn't think it could ever go so wrong, but on the other hand, these are becoming very large ships and the canal is already at breaking point in terms of space for ships of this type," says Elisabeth Schober.

Over a nine-year period, Schober has followed developments in the Korean shipbuilding industry.

"Together with other East Asian shipbuilding nations, Korea is leading the way in the development of the ultra-large container ships," she says.

The Ports team are studying how the centre of gravity of the global economy is shifting, from west to east. Europe is increasingly playing a more marginal role in maritime trade.

“The Suez Canal is the quickest sea route between Asia and Europe. A significant proportion of the world's trade passes through the canal. Our project looks at the ports that are the starting point for this trade, and the cities those ports are part of. But we are also interested in the links between the five ports we want to focus on, three in Europe and two in Asia. The Suez Canal is essential in this respect," says Schober.

In her research on shipyards, ports and container ships, Schober has recorded how maritime vessels have grown in size. She talks about a trend that started in the mid-00s.

"Mærsk was the first, but it wasn't long before several other companies joined the competition to have the largest container ship," says the anthropologist.

"If you want to be one of the big players on the maritime scene, having your own shipping line with ultra-large container ships is essential,” says Schober.

Between 2005 and 2015, container ships roughly doubled in size according to this anthropologist.

"Development of the ultra-large container ships is motivated by an expectation of rapid and increasing growth in international trade," she says.

There is considerable pressure on the shipping lanes. The blockage of the Suez Canal caused by Ever Given in March caused massive financial loss in the maritime industry, and the legal wrangling after the accident is far from over.

On average, fifty-two large ships pass through the canal every single day. According to Schober, 80-90% of all goods find their way to shops and warehouses on ships. She says that ultra-large container ships are nonetheless neither more profitable nor more sustainable in their way of transporting goods.

“The trend is in the process of leaving financial logic behind. The ultra-large ships were reasonable in terms of their size ten years ago. That’s no longer the case. Their size nowadays is more about being in the game,” says Schober.

Together with Hege Høyer Leivestad, she recently published the article "Politics of Scale: Colossal Containerships and the Crisis in Global Shipping" in the journal Anthropology Today.

In the article, they describe the ultra-large container ships as ‘sea-going giants’.

"It's a picture of economic growth that no longer produces prosperity, but rather the opposite, if thecost of the enlarged system around the ships is calculated," Schober said.

She refers in this respect to the economic historian Marc Levinson, who wrote in depth on ultra-large container ships. The crisis in global shipping is also the subject of an episode of the  Odd Lots podcast, with Levinson as a guest.

Hege Leivestad has been doing her field work in the Spanish port city of Algeciras in the Gibraltar Straits for several years. After the first megaship arrived in 2013, the port facilities have been massively expanded.

"Ports need to make all kinds of infrastructure updates to be able to accommodate these ships. Access to the sea for Algecira’s inhabitants is now strongly influenced by port construction," says Leivestad.

The port is also very proud of being able to handle the biggest ships, she adds.

"It’s important for the city's marketing, as a player in the global shipping industry, that everything is in place for the ultra-large ships to be welcomed," she says

The bill for infrastructure development goes partly to privately owned terminal operators, but also to municipalities and state-owned ports, according to Leivestad.

The development of the ports also entails environmental impacts that are in no way beneficial, according to the anthropologist. Dredging of the seabed can, for example, have serious consequences for the maritime environment, both above and below water.

"The seabed has to be routinely dredged to provide enough depth for the ships to enter the harbour," says Leivestad.

More intensity on board

Johanna Markkula has through the Container Ships project at SAI researched life on board and what changes in shipping have to do with the seafarers who have the sea as their workplace. Markkula says that the idea of maximising freight capacity has not resulted in anything positive for the workers on board.

"The common areas are more limited, and relatively few people work on board each ship. When the ship is twice the size, but the crew is still only nineteen men, it goes without saying that maintenance becomes more intense," says Markkula.

She explains that larger ships are also far more demanding to handle for the seafarers, both in narrow sea routes such as the Suez Canal, and in port areas. In addition, in order to receive the ultra-large container ships and cargo on board, container terminals are often built further away from cities than before, according to the anthropologist.

"Sailors tell us about problems when given shore leave. Not only because there work is more intense, but also because their ships dock in more remote places,” explains Markkula.

Markkula has recently published an article about the everyday experiences of Filipino sailors. And together with Hege Leivestad, she has also edited a theme section in the journal Focaal, entitled "Container Economies". Another participant in the Container Ships project, Camelia Dewan, has written an article about toxic emissions near shipwrecks, a reminder of some of the problems involved in the final stages of a ship's life cycle.

"The advantage of anthropologists studying such things as ultra-large ships, shipyards, breakers and container terminals is that we highlight completely different issues than researchers working with the maritime industry are used to talking about," says Schober.

She believes that research projects at SAI help focus on the social consequences of globalisation represented by container ships, and show how maritime logistics are intertwined with the lives of the people who work to maintain the system.

“Shipbuilders, seafarers and port workers are often forced to work in very demanding conditions to keep the flow of goods going," she says.