Why we look at pretty faces

Few visual impressions can be compared to humans’ interest for faces. New research suggests that our brain rewards us for looking at pretty faces. 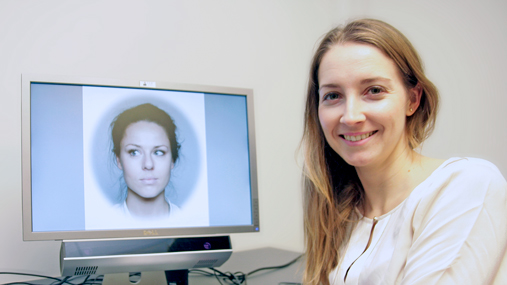 PhD Candidate Olga Chelnokova together with one of the faces that the participants assessed. Photo: Svein Harald Milde and Guro Løseth.

A quick glimpse of a face provides us with rich information about the person in front of us. Are we acquainted? Man or woman? Happy or angry? Attractive?

In her PhD thesis, conducted at the Department of Psychology, University of Oslo, Olga Chelnokova has explored how our visual system is able to direct attention to the most important information in a face. Her study suggest that evolution has made us experts on faces.

“We are very curious about others’ faces, we read stories in them and evaluate their aestetic value”, says Chelnokova.

Together with colleagues from the research group Hedonic Pharmacology lab she revealed that the brain reward system – a cluster of regions deep in our brain – is involved in our evaluation of other people’s attractiveness.

“The reward system is involved in generating the experience of pleasure when, for instance, we enjoy tasty food or happen to win a lottery. It turns out that the same system is also engaged in creating the feelings of pleasure when we look at a pretty face”, she says.

Previous research has shown a high level of agreement between people when it comes to evaluationg facial attractiveness. In the current study, the scientists let participants view images of faces pre-rated as most, intermediate, or less attractive. This was done after participants received a small dose of morphin, a drug that stimulates the reward system.

“Participants rated the most attractive faces as even more attractive, and were willing to do more presses on button that let them look at the picture for a longer time. They also spent more time looking at the eyes of the people in the pictures. Importantly, we observed the opposite behaviors when we blocked the reward system with another drug, such that, for instance, our participants gave lower ratings to the most attractive faces,” explains Chelnokova.

The researchers saw no effect from the drugs when participants viewed images of intermediate or less attractive faces.

Is it possible that the human brain has evolved to reinforce behaviors that are evolutionary favourable for us as a species? It very well could have, according to the scientists.

“Previous research has established links between facial attractiveness and several factors important for the evolutionary propagation of our species, such as health and good reproductive potential. We can speculate that there is an evolutionary reason behind our brain enjoying to look and wanting to look more at an attractive face,” says Olga Chelnokova.

She exphasizes though that the reward system gives an immediate response, an extra pleasure, but that the system’s response does not determine the path for our behaviour in the long term.

“For instance, we cannot eat chocolate all the time because it is not healthy. Similarly,  there are many factors that contribute to a good relationship much more than facial attractiveness. But we learn more about other qualities as we get to know the other person better.”

Another study in her thesis let participants look at three-dimentional pictures of faces while tracking their eye movements. The scientists recorded which parts of the face participants looked at when asked to recognize the faces. Participants were shown the same faces from different views.

“Recognizing a face from a novel view is not an easy task, because faces can look quite different depending on the view”, explains Chelnokova.

The scientists showed that 3-D information about facial structure helps us recognize faces from different views. They also saw that our visual system directs attention towards facial parts that provide us with necessary information quickly, such as the eyes.

Earlier studies have already linked the brain reward system to our experience of others’ facial beauty. In these studies, scientists scanned the participants’ brain while they were looking at pictures of faces. The researchers showed that passive viewing of beautiful faces increases activity in the reward system.

However, this previous evidence is only correlational, meaning that the scientists only observed increased brain activation to attractive faces, but did not test whether this activity actually affects how much people liked the faces they saw.

The results from the current PhD dissertation were the first to demonstrate that changing the levels of activity within the brain reward system results in changes in behavior, such as liking attractive faces even more, and wanting to look longer at them.

“The importance of the eyes in our evalutation of others has been well documented. For instance, it is hard to recognize someone if their eyes are hidden, while if someone is lying to us, we can often see it in their eyes. In general, if we are to understand how another person feels, the eyes can give us most of the required information,” says Olga Chelnokova.

Also the nose and the cheeks turned out to be important for the participants in the study, especially when looking at faces in 3-D, where these facial features provide us with valuable cues about the volumetric properties of a face.

Brain Rewards us for looking at pretty faces (Science)

Beauty Works Like a Drug on the Brain (LiveScience)