Inequality may lead to violence and extremism

While the differences between rich and poor have never been higher across OECD-countries, new research suggests that increased inequality can lead to higher risk of violence, racism, and extremism. 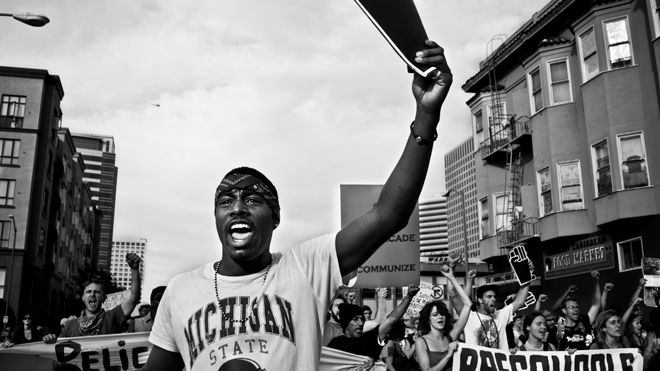 The gap between rich and poor keeps growing. According to a 2015 OECD report, the richest 10 percent of the OECD population earn 9.6 times more than the poorest 10 percent. In the 1980’s the same figure was 7.

According to recent findings, increased inequality leads to more violent and extreme attitudes.

”We see a vicious circle: The larger the inequality in a society, the more the privileged group supports the hierarchy. People in this group will also be more willing to use violence in order to keep their position,” said associate professor of psychology Lotte Thomsen at the University of Oslo / Aarhus University.

Researchers from Norway, Denmark, New Zealand (Victoria Wellington University), and the U.S. (Harvard University) recently published the article “Preferences for group dominance track and mediate the effects of macro-level social inequality and violence across societies” in the journal Proceedings of the National Academy of Sciences (PNAS).

The researchers base their findings on a large amount of data. Research demonstrating peoples’ attitudes towards social hierarchies has been combined with international indexes from organizations such as the World Bank and the UN.

The findings indicate a clear trend: Across 27 countries and almost 42.000 people, there is a close link between inequality and the privileged group’s support of the hierarchy.

”This applies whether you belong to the white majority in the U.S. or the highest caste in India,” Thomsen said.

The privileged group’s support of the hierarchy has been measured though their ”social dominance orientation” (SDO). The SDO turns out to be higher in countries with a larger risk of violent conflicts, corruption and absence of good governance, such as corruption and lack of the rule of law. It also increases with lack of access to health care and education, lack of democracy, lack of a free press, and lack of gender equality.

White U. S. citizens are willing to use violence

The researchers also investigated how being at the top of the hierarchy, and supporting it, may affect peoples’ attitudes and behavior towards groups with a lower status. More than 4.600 white U. S. Citizens from 30 states were asked.

In states where the inequalities and societal problems are relatively high, such as Florida, Indiana, and Alabama, white people turned out more likely to support the hierarchy. Consequently, they were also willing to suppress others in order to defend their position on the top of the hierarchy.

“To a larger degree than others, white research participants in such states agreed in sayings like “Some groups of people are just more worthy than others” or “To get what your group wants, it is sometimes necessary to use force against other groups””, explained post doc of psychology Jonas Kunst at the University of Oslo.

He believes that societal problems and inequalities in a society may increase these kinds of attitudes:

“In a society with large inequalities, supporting the hierarchy may be a way to secure one’s own privileged position.”

The scientific findings point to a link between the structures of a society and the psychology of the inhabitants. This link may be one of the factors explaining why hierarchies often are stable.

“It’s remarkable that we find this link in 27 countries across the globe. The structures of a society seem to affect how individuals think and relate to each other. Still, we do not know how these mechanisms work, and I do not think that people are conscious about it,” Lotte Thomsen said.

However, the fact that inequality affects behavior has been seen among a wide range of animal groups.

“The largest and strongest animals are often more likely to demand, and aggressively defend, popular resources. The little ones, the weak ones or the few ones more often bend down,” Thomsen said.

We may see an attitude change

Jonas Kunst believes that the increasing inequality in OECD-countries may lead to changed attitudes among the privileged groups.

“According to our model, rising inequality may affect attitudes and debates on topics like immigration, poverty and wealth. We may see more racism than we do today,” he said.

Kunst and Thomsen believe that their findings are worrisome.

“In our research we see a clear link between increased inequality and privileged groups’ support of societal hierarchies. This support is in turn linked to racism and increased willingness to take part in violent persecution of groups such as immigrants. The findings point to the possibly serious consequences of increased inequality because of the corresponding changes in the way people think and feel about social relations,” Lotte Thomsen said.