Researcher Daniel Quintana receives UiO Young Researcher Award for his research on the hormone oxytocin and its importance for physical and mental health. 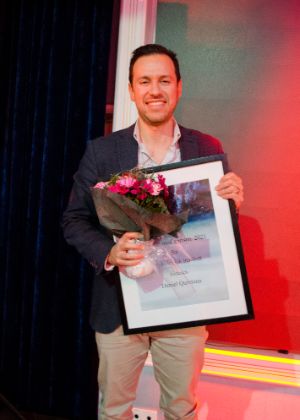 "There are so many excellent early career researchers at the University, so was both a pleasant surprise and an honour to be selected for this award. This recognition is a testament to the hard work of our team and the supportive research environments at the Department of Psychology, NORMENT and the KG Jebsen Center for Neurodevelopmental Disorders", says the happy award winner.

Quintana's main research interest is the investigation of biological systems that link psychosocial factors to health, with a focus on neuroendocrine systems and the autonomic nervous system.

Other research interest is meta-science, which is the evaluation and improvement of research methods in psychology.

"We have made a big effort to be transparent with our work, such as sharing analysis code and data when possible, and to adopt research practices that can improve the reproducibility of our results, such as preregistration.

While such practices are better for scientific research in the long run, they’re not often formally recognised or rewarded, according to Quintana.

"So, it’s quite encouraging to be recognised for a research program that has implemented open research practices, but of course we still have room for improvement in this regard", he continues.

Oxytocin is a hormone that is traditionally known for its role in social behavior, so Quintana took a calculated risk a number of years ago to expand his research to investigate oxytocin’s non-social roles, and how it more generally plays a role in both mental and physical health.

"I’m grateful for the Research Council of Norway, Kavli Trust, and the Novo Nordisk Foundation for supporting this research program, which has been a considerable departure from how oxytocin is typically investigated."

Research in the Offing

"The research that we’ve been doing over the past few years has set the foundation for our upcoming work exploring oxytocin’s potential for addressing social dysfunction and repetitive behaviours in youth with autism."

"We’re beginning a placebo-controlled clinical trial of four-weeks of oxytocin treatment later this year, and another study investigating the impact of a single dose of oxytocin on brain activity in youth with autism early next year."

"Our upcoming work will also be investigating the evolutionary history of oxytocin, which is actually a quite ancient hormone, to better help determine its current role in health. Moreover, we’re also investigating oxytocin’s role in behavioral flexibility using a mixture of oxytocin administration studies and large genetic datasets, which may also have implications for health and how we behave", Quintana ends.

It's not the first time Daniel Quintana's research has been honoured. He has also received: