Turn the Teaching Upside Down

Teachers at the Department of Sociology and Human Geography take chances in the auditorium: "A lecture is a format that was invented at a time when people barely had textbooks". 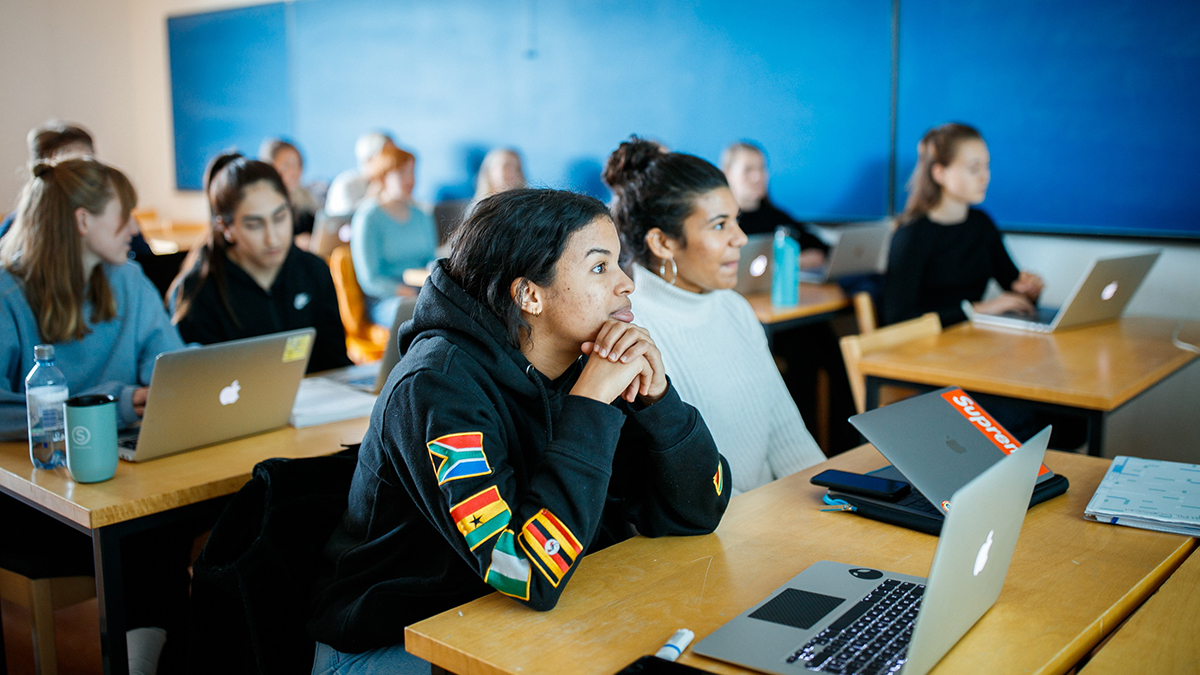 To think about learning in new way: The examples of alternative teaching programs at ISS are many, according to the first merited teacher at the Faculty of Social Sciences. Photo: Oda Hveem/UiO.

After two semesters of corona shut-down, lecturers at the Department of Sociology and Human Geography (ISS) asked their students how digital teaching was working.

One third of the students who responded to the questionnaire said that either their internet connection was too poor or that they lacked adequate space to sit in order to follow lectures that were live online.

“I thought, we cannot continue like this”, says Magne Flemmen.

He is a professor at ISS and teaches social inequality and class divisions for sociology students. As he faced the third semester of fully digital teaching, Flemmen decided to change everything. He wanted to make it easier for students to follow on screen, and to take care of those who were studying under difficult conditions.

“I changed all my lectures to be based on shorter video clips, which it was possible to watch without a stable internet connection. You could watch them in bed if you wanted. Afterwards, the students had the opportunity to meet on Zoom to talk about the material, but attendance was not mandatory. You could easily follow the lecture series without going on Zoom”, says Flemmen.

Magne Flemmen made a plan to turn his entire teaching programme upside down, and knew it was going to be a lot of hard work. But the job was even more difficult than the sociologist had expected. He talks about the explosive workload in the spring of 2021.

“I had to learn basic video production. I had to buy a microphone, some lights and a green screen, so I could cut it myself and put the recordings on slides. Especially getting the green screen to work was harder than I thought. The video editing took a lot of time”, he says.

According to Flemmen, another challenge with video teaching was getting into the right mood. Some days it was difficult to act as if he was talking to a hundred people, when in reality he was sitting in a room at home and alone.

“I stayed up late at night working several times, both with the recording and the editing”, says the sociologist.

At the end of the semester, Flemmen was tired and despondent. He was unsure if the result was worth the effort. That was until Flemmen was told that the prize for Lecturer of the year at the Faculty of Social Sciences in 2021 was being awarded to him.

“It was very cool and fun that there was a practical reward at the other end. Making the teaching special requires something extra. It is great that the effort is appreciated. But perhaps even more important is that I have received feedback that the students have had a better time with this programme and that they get more out of the teaching because of the way I have set it up”, says Flemmen.

«When the teaching method facilitates participation, it is easier to get in touch with the students' learning».

Turn the classroom upside down

When the students can return to the lecture halls and seminar rooms at the Faculty of Social Sciences, Magne Flemmen is clear about what he wants to take with him from the pandemic teaching.

He will continue the presentation of theory and concepts in video format, and spend the time with the class on discussion and questions instead.

“In pedagogy, the model is called ‘flipped classroom’. I have not done this before the pandemic, but the model is definitely something I will continue with. When the teaching method facilitates participation, it is easier to get in touch with the students' learning”, says Flemmen.

The sociologist points out that it is a key learning goal for sociology that students should have a critical reflection on what they are doing. To achieve this, students must also ask critical questions about the curriculum, according to Flemmen, and they should think about whether what they are learning conforms the way they themselves experience the world.

“Not because it is a truth test, but rather it is a way to get yourself to think properly about what you learn”, he says.

“It is thus about how people draw boundaries between themselves and others, how people explain who is like themselves, and who is not. It can be taste, preferences, moral points of view”, says Flemmen.

The students were grouped based on taste patterns, such as what kind of music they preferred. The lecturer asked them to decide whether they felt at home in the group they had been put in, and what they thought about the other groups. Does taste in music tell you something important about a human being? Is this a difference that makes a difference?

“The question of whether the students recognise themselves is both a means of critic and a method of establishing a personal connection to the research, the subject, the concepts”, says the sociologist.

Flemmen believes that his most important job as a lecturer is to convey why something is important, and make the material relevant to the students.

“To feel that something is important, you must experience it as important to yourself. The lecture is a format that was invented at a time when people barely had textbooks. We are not going to throw the baby out with the bathwater, but I think there are other forms of teaching that can to a greater extent generate a sense of engagement and participation among the students.”

Assumes the role of expert

When students are to evaluate their own benefits from the lessons, there are always some who report that they learn most from traditional lectures, says David Jordhus-Lier, professor at ISS. Jordhus-Lier was the first merited lecturer at the Faculty of Social Sciences in the spring of 2021.

The merit scheme aims to further promote the quality of education at the University of Oslo, through the education term, salary increases and membership of the Pedagogical Academy.

Jordhus-Lier points out that there are good reasons to give a monologue, to give a lecture. As a professor, he must occasionally assume the role of expert.

“But a learning programme cannot be based on this expert role alone”, says Jordhus-Lier.

He points to a study that indicates that the experience of having learned something does not always correspond to the actual learning outcome.

“It is only when the student grasps something themselves, that the knowledge is internalised. Putting something into words in a way that makes sense to you is a good starting point for the exam”, says Jordhus-Lier.

Ownership of the concepts

David Jordhus-Lier himself has extensive experience of using the flipped classroom model in his own lecture practice, and in collaboration with LINK he has produced several short videos on the ISS YouTube channel.

The motivation is that lecturing should be done before the students show up in the classroom.

“It's about freeing up time to talk to the students. The videos are used to ensure that everyone has the same starting point when we meet, so we can spend time establishing an ownership of the concepts. This is the main idea behind my learning philosophy”, says Jordhus-Lier.

The merited lecturer himself learns poorly from the mistakes of others, but well from his own mistakes. It characterises the way he teaches. Instead of giving a long lecture on what a good focus group is, Jordhus-Lier makes a short video about focus groups, and spends time with the students to actually organise focus groups, test out the interview role, try different questions.

“Then the students also gain experience before they go out into the field, instead of just hearing someone else talk about how social geography is practised”, he says.

According to Jordhus-Lier, there are many examples of alternative education programmes at ISS.

“In the master’s course ‘Futures of Work’, for example, we as teachers learn from the students. Much of the course is based on the students' own experiences from working life”, he says.

The human geographer admits that pushing so much of the learning onto the students sometimes leads to minor mistakes. Putting the student in focus as Magne Flemmen and David Jordhus-Lier do, is quite new in a teaching context. According to the merited teacher, it will still take a while before they know for sure what works and what does not work properly.

“As teachers, we can improve in many areas. It’s no more than ten years ago that most of us focused on the lectures. Knowing that we were experts in our fields, we would tell our students about one thing or another. We are now in the middle of a change in mentality about what learning is”, says Jordhus-Lier.

Change processes will always bring trial and error, according to the social geographer. He is therefore grateful that the department management and his colleagues at ISS support his attempts to rethink teaching.

“It is fun to be one of those who get attention, both as an award recipient and as a merited teacher. But the most important thing is that the learning resources and support apparatus I have enjoyed will be available to anyone who wants to develop their teaching”, says Jordhus-Lier.

“We have relatively close connections at ISS between employees and students, perhaps especially in the master’s programme. We work well together, through the programme council meetings. The various teachers try their best to make the courses relate to each other”, he says.

The merited teacher believes that it is a virtue that the lecturers at ISS dare to interfere in each other's teaching.

“I think we recognise a joint collegial responsibility for ensuring that the various topics make sense and work together as well as possible".