The coffee farmers in Guatemala have large expenses in the face of fungal attacks and droughts, but the price of coffee remains the same. What does it take for a global value chain to adapt to climate change? 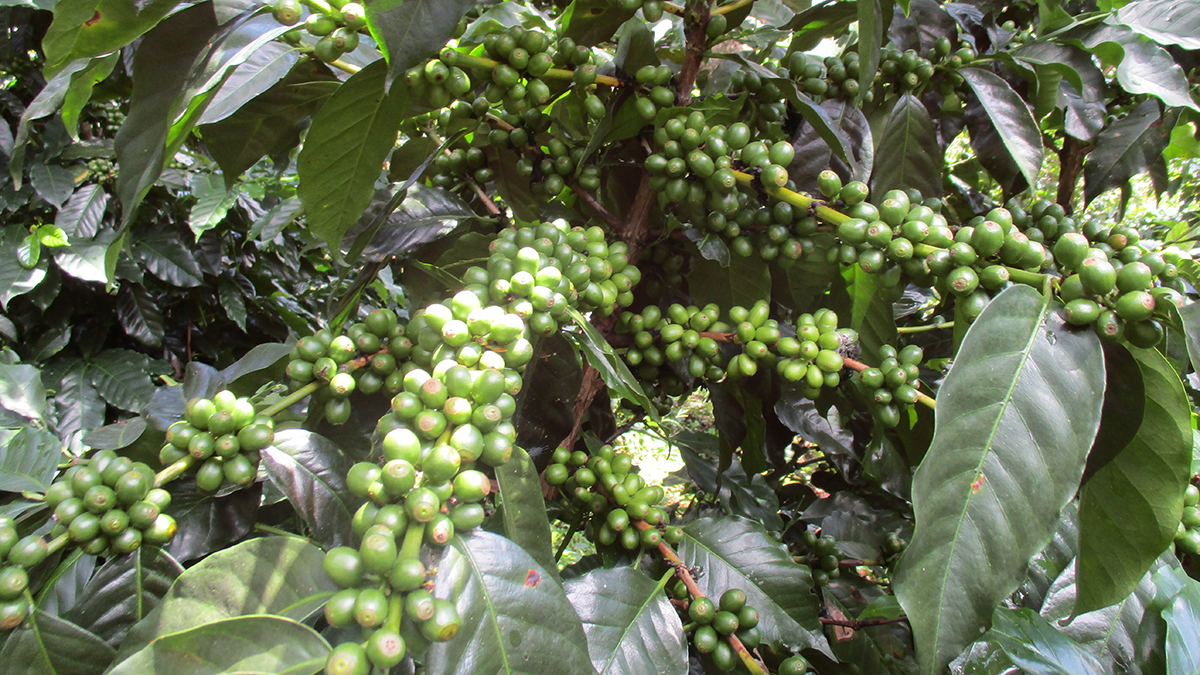 The voice of Guatemalan coffee farmers: "Although there are diseases, although climate change is like this, we are seeing what we can do to solve it, to find the balance. Plants would just need some fertilizing and pruning. Today, it is more costly, and many say: 'So many diseases are here, it costs so much, better not plant coffee anymore'. Well, I say: 'Yes, you can. It can be done'". Photo og text: Prudencio Gomez Gomez.

The world community's power of action in the face of the coronavirus can and should be compared to the global crisis that climate change is creating. This is the opinion of Gail Hochachka, PhD Fellow at the Department of Sociology and Human Geography (ISS).

She recently defended her dissertation on the transition to sustainable coffee production in Guatemala.

- We have managed to meet a number of complex challenges during the pandemic, in an effective and collective way, across cultures, systems and perspectives. Why don’t we handle the climate crisis in the same manner? asks Hochacka.

On fieldwork with coffee farmers

The human geographer has spent three summers on field work in Guatemala, where she has studied the different perspectives about climate change held by the various actors in the coffee value chain, from international dealers to local coffee farmers.

The aim of the doctoral thesis has been to better understand how value chains can adapt to climate change, given the diversity of meanings about climate change.

- Coffee is basically a variable. No matter which value chain, the question is equally relevant: How to adapt to the challenges that climate change brings, in the most transformative and sustainable way possible?

In Guatemala, climate change is materializing primarily in the form of more unstable weather and longer periods of drought. This is bad news for coffee producers.

- The changes in the weather situation have led to a massive fungal attack on the coffee plants, so-called leaf rust, says Hochachka.

According to the doctoral fellow, 1.7 million jobs in South America have been lost due to leaf rust. Nevertheless, the problem is small compared to the growing threat of drought.

- After all, leaf rust can be controlled with pesticides and fertilizers. Against the drought it is harder to resist. The changes entail large expenses for those who own the farms. The price of coffee in Guatemala is increasingly less than what coffee farmers can spend on producing it. The problem is becoming acute for coffee production in Guatemala, says Hochachka.

Climate change is also entangled with other types of change in the country—social, cultural, technological and economic—and climate impacts are complex and unprecedented. When it comes to adaptation, coffee farmers have found that technical responses are limited.

- The entire value chain must gather around a shared meaning of the challenge and a common method of how to respond to these climate changes, if coffee production in the country is to survive, says Hochachka.

When Gail Hochachka went to field work in Guatemala, she brought with her an ethnographic method called "photovoice" in her academic toolbox. The method involved giving the participants cameras, along with research questions: What does climate change mean to you? How am I adapting?

- The coffee farmers were asked to take pictures of things in their immediate environment that represented the consequences of climate and environmental changes, Hochachka says.

After a few days alone with the cameras, the participants met the researcher again to discuss what had been captured on the lenses.

- In fact, this is more difficult than it seems. To take a picture of something that captures the essence of what climate change actually means, on a personal level, Hochachka says.

- I would say this process is psychoactive, it activates aspects of the participants' own opinion production and evokes their own sense of agency and commitment for climate action.

Several of the coffee farmers who participated in the study admitted that "I know this now, but I did not know that I knew it", according to the human geographer. With a desire to incorporate an interdisciplinary perspective into her doctoral dissertation, she sought out partners from the psychological community in her native North America for help analyzing the transcripts of the conversations. Analysis showed a deep diversity of how participants organized meanings about climate change.

Finally, Hochachka invited the participants to a meeting to discuss the photo texts in plenary.

- We had focus groups to work systematically through the material: What can this specifically mean for the future coffee production in the area? says the doctoral fellow.

Despite more than 60 photos, participants were able to gather around seven topics that were relevant to everyone, Hochachka explains, and which coffee farmers thought could lead to joint action.

- Even though the participants had different views on climate change, these seven points show that it is possible to agree on a joint action plan, she says.

These are the seven topics agreed upon by the coffee farmers in Guatemala:

The next step was to gather the value chain: manufacturers, buyers, exporters, marketing and people from the government. In Guatemala City, they met to discuss the topics. A main goal for Gail Hochachka was to get the various actors to reflect on how the value chain could be adapted for sustainability.

- A value chain is like a stream. Even though the water is the same, the actors downstream, such as buyers, retailers and consumers, do not necessarily have contact with the upstream actors, the coffee farmers, she says.

Hochachka believes the conversation in Guatemala City demonstrated the importance of buyers and exporters understanding the reality of producers, and acknowledging the fact that coffee farmers carry the highest risk when climate change increasingly threatens livelihoods.

- I think the downstream actors realized that they are not affected as directly as the producers, at the same time as the entire value chain is dependent on what happens upstream, says the human geographer.

- If actors in fields other than coffee production also to a greater extent realize how value chains work, and can utilize the connections between them for joint problem solving, such meetings could be a fantastic vehicle for sustainability.

A product of knowledge

When Gail Hochachka returned to Guatemala for the second time, she brought with her enlarged prints of the photographs and the interpretations of the participants.

- The coffee farmers' reflections on climate change have become a knowledge product that can be used for something useful and concrete, says Hochachka.

- Making the value chain's connections visible in this way has never been done before with this particular coffee value chain, and helped support collaboration between actors.

The work of the human geographer is part of a larger project at ISS - AdaptationCONNECTS, led by the world-renowned climate researcher Karen O’Brien. Over a five-year period, the project has investigated how transformation can contribute to climate change adaptation.

In the spring, AdaptationCONNECTS will be completed.

- Now we aim to gather insight from all the sub-projects, and look at the findings that go across the various sectors, says Hochachka.

- We have looked at transformation and willingness to change in education, travel, art and coffee production. Technical solutions to the climate crisis are needed. But not sufficient. The aim of AdaptationCONNECTS has been to investigate the ways in which we can include the human dimension when dealing with complex problems, such as climate change. Behavior and system change go hand in hand with transformation in psychology and culture.