New theory on the Israel-Palestine conflict

While Palestinians see the Israeli occupation as the core of the conflict, Israelis defend the occupation in terms of their security. 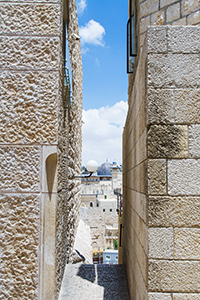 - The absence of a common understanding of the situation makes it impossible to find a peaceful solution, points out Anja Sletteland in her recently completed doctoral thesis. Her research into the Israel-Palestine conflict put her on the trail of a new term, which she has called political anomy.

- When there is no common perception of the situation or agreement on the norms that apply to cooperation everything can be a source of conflict. This is what characterizes political anomy says Sletteland.

Within the Israel-Palestine conflict there is not only a different understanding of the conflict itself, but also of the political norms that can contribute to making peace.

- Broadly speaking, one can say that the Palestinians root their norms and demands from the United Nations and international law, while Israel refers to the principles of sovereignty, and argue that the world community's intervention entails a risk for the Jewish state's security. The Israeli position is shared by the United States, which supports them in the UN. The US demands that the two sides sign a mutual truce before Israel withdraws, and thereafter a two-state solution will be introduced.

- Israel considers the occupation as necessary both for national security and as a bargaining chip in peace talks. For the occupation to end Israel requires that the Palestinians first recognize Israel as a Jewish state. That this is the order a resolution of the conflict must follow is, however, difficult to accept from a Palestinian perspective. For Palestinians the core of the conflict is the occupation of the West Bank, as well as the blockade of Gaza and the issue of redress for refugees after the war in 1948. Israel, on the other hand, considers Gaza a lost cause and denies that Israel is responsible for the refugees. Thus, the situation is completely deadlocked, believes Sletteland.

Common ground must be found

According to Sletteland the conflict cannot be resolved before the parties find common ground from which to negotiate.

- It’s not possible to work together without shared norms. We need a common language with which to understand one other, institutional norms in order to cooperate on policy objectives and structural norms for anchoring the rules of engagement in the community. All this is missing in a situation characterized by political anomy.

Anja Sletteland believes that there will always be degrees of political anomy in all conflicts, but that the Israel-Palestine conflict is unique.

-The conflict between Israel and Palestine has, however, grown in scope over the decades and now encompasses countries and groups the world over. And there are internal disagreements in the two conflicting countries. This makes the situation especially complex. Today, the conflict is a zero-sum game in which both parties are competing for the dominance their world view instead of finding a common future.

The theory of political anomy makes it possible to show how the absence of common standards makes it impossible to resolve conflicts.

- Conflict resolution is ultimately about the power to decide how to proceed. If the new French peace initiative, or other attempts, are to have a chance of success then the approach of previous negotiations must be changed. The international community is also contributing to pushing the parties apart when one side’s perspective is supported and the other rejected. There is currently no model for resolving the conflict that looks at both perspectives in context. If the negotiations are to succeed the parties must find a common premiss from which to start, says Anja Sletteland.

Anja Sletteland is a human geographer educated at the University of Oslo, and is a member of The Research School on Peace and Conflict organized in cooperation between PRIO, the University of Oslo and NTNU. She spent two years of her doctorate as a visiting scholar at Harvard Kennedy School in the US.