Bodily autonomy under attack in the US: Access to abortion and gender-affirming care dismantled by Christian-Right theocracy

In anticipation of Roe v. Wade being overturned, bodily autonomy is under attack in the US. The coalitions leading the push to end access to abortion care for lower-income pregnant people also lead the push to end gender-affirming care for transgender and nonbinary people. 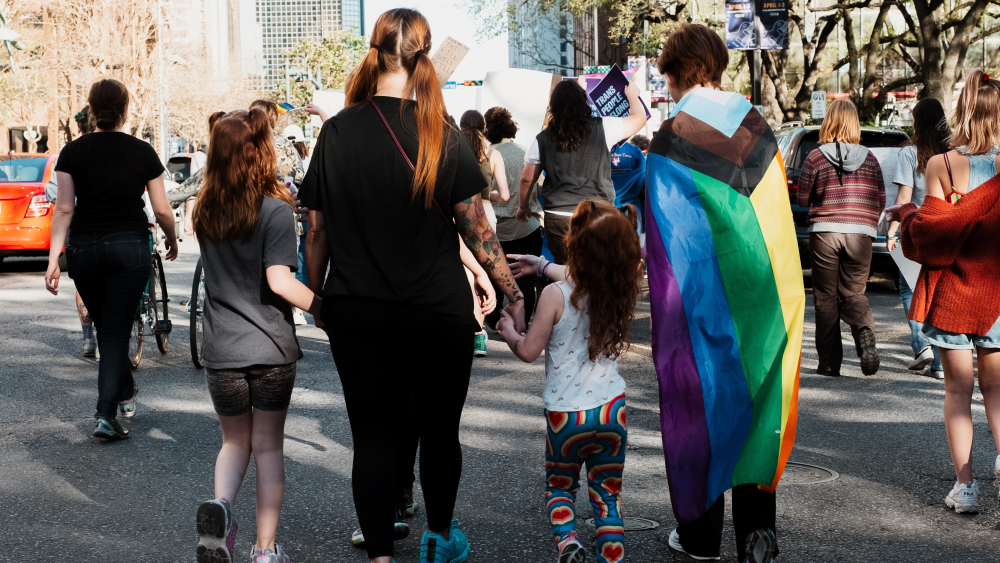 Photograph by Aiden Craver, via Unsplash

The United States was shocked on May 2nd, when US news outlet Politico published a leaked draft of a Supreme Court opinion in the landmark case Dobbs v. Jackson Women’s Health Organization. The case concerns a restrictive Mississippi law that bars access to abortion care for pregnant people after fifteen weeks of pregnancy. The draft opinion, written by conservative Justice Samuel Alito, upholds the Mississippi law and, perhaps more shocking than the unprecedented leak, overturns the 1970s case of Roe v. Wade, in which the Supreme Court held that the United States’ Constitution provides a right to abortion care in every US state up to a certain point in a person’s pregnancy.

In anticipation of Roe being overturned, and over twenty states poised to ban abortion in its absence, bodily autonomy is under serious attack in the United States. The same coalitions of organizations leading the push to end access to abortion care for lower-income pregnant people who cannot afford private doctors and trips out of state are also leading the push to criminalize, and end access to, gender-affirming care for transgender and nonbinary people, particularly young people.

More anti-trans laws were introduced in 2021 in state legislatures than any year previously, and 2022 stands to easily break that record. States are introducing, and passing, bills that bar transgender student athletes from playing school sports; bills that prevent teachers from teaching (or even talking about) gender, sexuality, and LGBTQ people; bills that forcibly out LGBTQ students to their parents; bills that affirmatively permit anti-LGBTQ conversion therapy; and bills that criminalize and make it harder to access gender-affirming care.

On May 8th, an Alabama law went into effect making it a state felony to provide gender-affirming care to youth 18 years old and under, the first law to do so in the United States without a judicial order blocking it. Alongside criminalizing the provision of surgical care, which, opponents of the law point out, is not accessible to youth in Alabama anyway, the law criminalizes the provision of life-saving hormone blockers and hormone replacement therapy. The law also forces any “nurse, counselor, teacher, principal, or other administrative official at a public or private school” to affirmatively out any transgender or nonbinary students to their parents, sending youth from unwelcome homes back into potentially life-threatening environments.

Alabama is only the first state in which a ban on gender-affirming care has gone into effect. Three other US states have passed laws or guidance restricting gender-affirming care for transgender and nonbinary youth, but all three have been blocked by courts from implementing these restrictions. Arizona and Arkansas legislatively banned gender-affirming care, and Texas governor Greg Abbott has instructed state child welfare agencies to investigate families who support their transgender and nonbinary children’s transitions. Each of these state’s bans, as well as Alabama’s, are under judicial review.

Beginning with Idaho’s law in March 2020, fifteen states now ban transgender and nonbinary students from participating in school sports that match their gender identity. These laws not only prevent trans youth from playing sports with their friends and classmates, many of these laws permit school officials to perform invasive and unlawful examinations of student athletes’ bodies to “determine” a student’s gender. Six states currently censor conversations about LGBTQ people in schools, and five states allow parents to opt their children out of any conversations involving sexuality, gender, or LGBTQ people at school.

At the beginning of 2021, three Christian-Right organizations announced a new coalition of groups “passionate about protecting children”. The Promise to America’s Children was founded by the Alliance Defending Freedom, the Family Policy Alliance, and the Heritage Foundation, all goliaths of the US Christian Right, and is co-signed by twenty national groups like Eagle Forum and the American Association of Pro-life Obstetricians and Gynecologists. The Promise lays out ten principles that these organizations hold true, including: schools should not teach comprehensive sexual education or about access to abortion care; transgender and nonbinary students should not be able to access bathrooms or play sports at school; transgender youth should not be able to access gender-affirming care, even social transition; child welfare organizations should be able to discriminate against LGBTQ youth and prospective parents; and teachers must out LGBTQ students to their parents, even if their parents intend to subject the child to harmful, discredited conversion therapy practices. The Promise to America’s Children is also endorsed by nearly thirty state lawmakers, including legislative leaders in four states.

These organizations and law-makers are the same ones fighting to end access to safe abortion care. US Senator Josh Hawley wrote an extensive brief to the Supreme Court, supporting Mississippi’s right to criminalize abortion care, co-signed by Senators Ted Cruz and Mike Lee. Hawley is also the author of a federal Parental Bill of Rights that would force schools to out LGBTQ youth to their parents, among other provisions. The language of Hawley’s bill, like the language of the Promise to America’s Children, is couched in protecting children from predatory schools and teachers. (See also the increase in anti-LGBTQ rhetoric, such as “groomer,” used to slander teachers, lawmakers, and advocates who are opposed to anti-LGBTQ legislation.) But as the Trevor Project, a US suicide prevention organization, found in its recent report of suicidality among sexual minority youth, LGBTQ-affirming parents and schools are excellent insulators against suicidal ideation.

So it comes as no surprise that these organizations are the same ones supporting Mississippi’s law to criminalize abortion care. Concerned Women for America filed a brief in support of the Mississippi bill and is a formal national partner of the Promise to America’s Children. So too did the American Association of Prolife Obstetricians and Gynecologists, the American College of Pediatricians, the Christian Medical and Dental Associations, the Ethics and Public Policy Center, and Focus on the Family. Dozens more Christian-Right organizations have either endorsed the Promise to America’s Children or written and co-signed briefs in support of Mississippi’s draconian anti-abortion bill.

The attacks on bodily autonomy in the US are inherently connected: the same organizations and law-makers criminalizing abortion care are the organizations and lawmakers criminalizing gender-affirming care. Justice Alito, in his leaked draft of the Dobbs case on the Mississippi abortion law, affirmatively stated that the Constitutional principle of privacy rights was erroneously established. This principle of a right to be free from state and federal interference in one’s decisions about who one has sex with and what happens when one has sex underpins many rights that Americans consider fundamental. If the US Constitutional right to privacy falls, then, as Alito directly referenced in his draft opinion, our rights to bodily autonomy as a whole are at risk, including our right to recognize our relationships, our right to have sex with whom we choose, and our right to gender-affirmative care and reproductive health care.

These attacks on bodily autonomy are engendering more immediate harms against LGBTQ people and people seeking abortion care. According to the Human Rights Campaign, 2021 was the deadliest year for transgender and nonbinary people, with 2022 on track to exceed that record. In 2021, fifty-seven trans and nonbinary people were killed in the US, a record likely far below the actual number, given rampant misgendering by non-affirming families and law enforcement.

And the atmosphere of heightening homophobia, biphobia, and transphobia is impacting LGBTQ youth’s health. According to the Trevor Project, 45% of LGBTQ youth seriously considered attempting suicide over the past twelve months. Nearly one in five youth ages 13-18 told the Trevor Project that they had attempted suicide in the past year, including nearly 30% of youth who also reported facing physical threats or harm because of their sexual orientation or gender identity. Each of these metrics is heightened for youth living at the intersections of multiple marginalized identities: youth of color, particularly Black and Indigenous youth, trans and nonbinary youth, and youth in non-affirming homes are all more likely to report having considered or attempted suicide.

Likewise, the bans on abortion-care also disproportionately impact people living at these intersections. Due to the systemic lack of access to comprehensive and affordable health care, Black people have the highest rate of abortion in the US and are severely impacted by restrictions on access to abortion care. Black people and other people of color in the US are also more likely to face complications or death from birth, making abortion access that much more important. Giving birth is far more dangerous than accessing an abortion, and in a country where Black birthing people are nearly three times more likely to die during pregnancy, limiting access to abortion is only going to exacerbate that disparity.

While white women in outfits from the Handmaid's Tale warn of the impending Christian-Right theocracy, youth and pregnant people of color are already facing the deadly impacts of restricted bodily autonomy. With mainstream politicians seemingly unwilling to spend their political capital to shore up the rights of sexual and gender minorities, Americans are turning to grassroots, local, and community organizations and funds. The National Network of Abortion Funds supports more than 80 local funds across the country helping people access their needed abortion care. In the days after the leak of the draft opinion overturning Roe v. Wade, the Network saw an influx of nearly two million dollars, more than half of which was sent directly to state and local funds.

Bodily autonomy is dangerous to the Christian Right, whose ideology rests on a narrow Biblical view of the world – including the idea that there are only men and women, who, once married, may only have sex in order to procreate. To the Christian Right, bodily autonomy, including abortion care and gender-affirmative care, threatens the stability of the “natural family”. Of course, the natural family as described by the Christian Right has never been the dominant family structure in a world of chosen family, extended family, infertility, loss, adoption, foster care, kinship care, and community care.

In the face of attacks on those we love, we must turn to those family structures that do support us, and reinforce the familial, kinship, and community bonds that knit us together. If affirming homes and schools support LGBTQ youth, and grassroots community activism supports people seeking abortions, then affirming homes and grassroots community we must provide. When Roe v. Wade was decided fifty years ago, it was thanks to the tireless work of communities who did not want to see more people dying due to unsafe and criminalized abortion care. And so we continue that work to ensure that LGBTQ youth and pregnant people know they are loved, wanted, and supported. For the next fifty years.