On the ideological and cultural diversity of current antisemitism

In May this year, the latest round of hostilities in the Israeli-Palestinian conflict set in motion a wave of antisemitic attacks targeting Jews in Europe and the US. A closer look at these incidents demonstrates the ideological and cultural diversity of current Jew-hatred. In order to understand this diversity, a broader historical perspective is helpful. 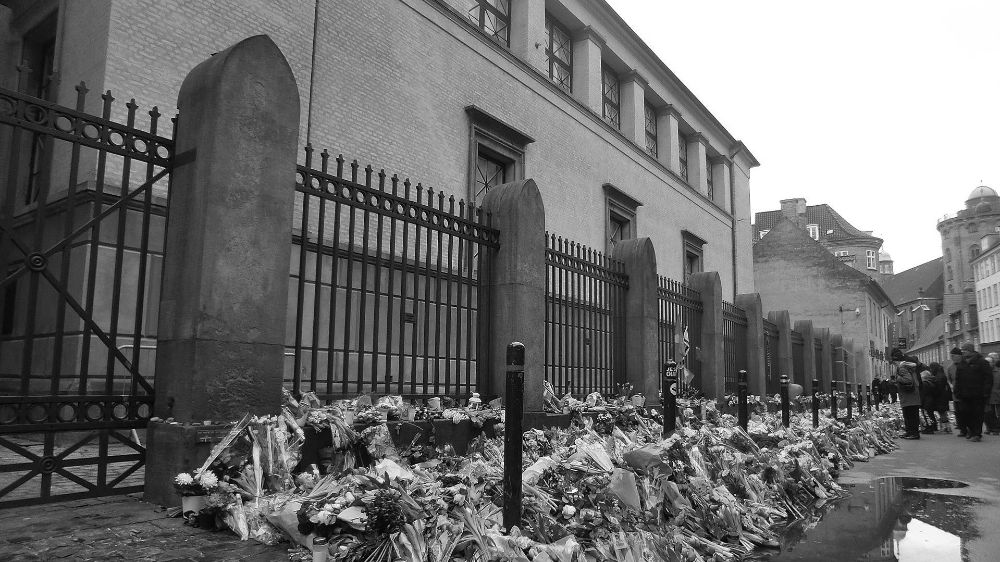 Flowers in front of the Great Synagogue in Copenhagen after a shooting in 2015. Image: Kim Bach (CC)

The outbreak of hostilities in Israel and Gaza was followed by attacks on Jews in Western European and North American cities, as well as a flurry of antisemitic messaging online.

To name but a few notable incidents: a London rabbi was pulled out of his car and hit in the head with a brick; a convoy of cars drove through a Jewish neighborhood in London with passengers waving Palestinian flags and shouting antisemitic abuse through a megaphone; a Norwich synagogue was daubed with a swastika and “Free Palestine”; a group of 180 people marched against a synagogue in Gelsenkirchen, Germany, shouting “Scheiss-Jude” and waving Palestinian and Turkish flags; Jewish diners at a Los Angeles restaurant were assaulted by persons carrying Palestinian flags; a Jewish man wearing a kippah was violently assaulted on New York’s Times Square by men shouting antisemitic abuse; a kippah-wearing man was beaten kicked in the head, and cut in the face with a knife on the streets of Gothenburg, in broad daylight, by a group of men shouting antisemitic insults. A week later, he was once again insulted and spat after on the street, this time by someone the victim perceived as belonging to the far left.

In the UK, the Community Security Trust (CST, a British charity and monitoring agency) recorded a total of 639 antisemitic incidents in May (a record high for a single month), including 34 violent assaults, 47 threats, and 520 cases classified as abusive behavior. The vast majority of cases involved language or symbolism related to the Israel-Palestine conflict. Perpetrator backgrounds were quite diverse in terms of ethnicity: among the 241 cases where witnesses described the appearance of offenders, 46 percent were described as Arab/North African, 24 percent as white, 22 percent as South Asian, and 8 percent as black.

While we do not have detailed perpetrator descriptions in all cases, the general picture seems clear enough: far-right or white supremacist forms of antisemitism appear to have been a limited feature of the recent wave of incidents. While such elements were also observed, most incidents occurred in the context of pro-Palestinian or anti-Zionist protest. Participation of Islamic extremist actors was also evident. Notably, global jihadist groups such as ISIS and al-Qaeda explicitly called on their followers to “fight the Jews” wherever they could be found. These observations are consistent with data from two European-wide victimization surveys from 2012 and 2018, in which victims of antisemitic violence and harassment responded to questions about the identity of perpetrator(s).

Judging from these data, the events of May 2021, and also keeping in mind the deadly antisemitic attacks motivated by extreme-right ideology in recent years, current antisemitism is clearly characterized by a diversity of intolerance, ranging across ideological and ethno-cultural divides. In order to understand how this came to be, a brief historical sketch is necessary.

To the extent that people tend to associate antisemitism with the far right, they have good historical reasons for doing so. Antisemitic ideology fundamentally shaped the worldview of Hitler and the National Socialists, motivating their attempt to murder all of the Jews under Nazi control. In the post-war era and until this day, denying the Holocaust and reproducing antisemitic myths has been a characteristic pursuit of right-wing extremists. The imperative to prevent a repetition of the civilizational breakdown set in motion by the Nazis – “Never again!” – not only lies at the heart of central democratic institutions and values such as minority rights, but also motivates post-war and contemporary efforts to monitor, study, understand, and explain far-right ideology, politics, and violence. For these reasons, the far-right context of Jew-hatred certainly remains important. That said, antisemitism did not start out as a right-wing phenomenon, and it is not likely to end as one.

Antisemitism has a long history, with roots in the ancient world of the Greeks and Romans. Before the 19th century, Jew-hatred was based on general outgroup hostility, religious prejudice, and economic factors (Jews were targeted because of their status as a middleman minority). It had nothing to do with the “right” or “left”, concepts that had not yet been invented. This changed with the French Revolution, which both established the modern left-right divide and gave rise to a new form of antisemitism that grew out of the right-wing reaction to the Revolution in particular and to the unsettling effects of modernization in general.

From the speculations of early-19th-century royalists that Jews were secretly behind the French Revolution, to the international anti-Jewish congresses of the 1880s, to the Dreyfus Affair (1894–1906), and finally to Hitler’s relentless pursuit of antisemitic policy to its genocidal conclusion – there is no doubt that organized antisemitism in the 19th and first half of the 20th centuries was primarily a right-wing phenomenon.

Beginning in the mid-20th century, however, the development of antisemitism became characterized by ideological and geographical diffusion. While antisemitism was discredited in mainstream democratic politics after Auschwitz, the beliefs lived on and found outlets not only in extreme-right subcultures, but also within the socialist Eastern Bloc and in the Arab world. The birth of Israel and the Jewish state’s continuing conflict with its Arab neighbors was a key contextual factor in these developments.

Even though the Soviet Union supported Israel in 1948, the Jewish state’s request that Soviet Jews be allowed to emigrate put an end to the warm relationship. Stalin, ever-fearful of divided loyalties among his subjects, denied the request and went on to launch an antisemitic campaign in late 1948, leading to the closure of Jewish cultural institutions across the country, executions of Jewish writers, and what appears to have been the beginning of a major purge that would involve large-scale deportations of Jews (the Doctors’ Plot). The campaign reverberated in other parts of the Eastern Bloc. In 1952, a show trial was staged in Czechoslovakia involving Jewish defendants forced to confess to conspiring with “international Zionism” to undermine socialist governments. Antisemitic propaganda accompanied the trials, branding Jews as traitors and agents of enemy powers.

Soviet antisemitism after the Six-Day War

Following the Six-Day War of 1967, in which Israel defeated their Soviet-backed Arab foes, the Soviet regime renewed its propaganda efforts ostensibly targeting Zionism. While anti-Zionism is not equal to antisemitism, the two sets of beliefs can overlap. The Soviet case shows how. Just beneath the anti-Zionist surface, the propaganda reproduced classical antisemitic stereotypes, including caricatures of hook-nosed “Zionists” depicted as perniciously cunning and deceitful, conspiring to dominate the world, exercising massive control over global media, opinion, and economy. The propaganda efforts, led by KGB officials, targeted Judaism as well, framing the religion as an inhumane doctrine teaching “poisonous hatred for all peoples”. Some caricatures featured serpents and spiders marked with the Star of David, Der Stürmer-style, to symbolize the evil of “the Zionists”.

The impact of this campaign, involving books and pamphlets printed in millions of copies and translated into several languages, has yet to be fully charted, but it may have influenced far-left discourse on Zionism and Israel in the West. Moreover, the Soviet campaign was partly responsible for the 1975 adoption of the UN General Assembly Resolution 3379 condemning Zionism as a form of racism (the resolution was annulled in 1991). Historian Izabella Tabarovsky suggests that the propaganda effort served to “[empty] Zionism of its meaning as a national liberation movement of the Jewish people and [associate] it instead with racism, fascism, Nazism, genocide, imperialism, colonialism, militarism and apartheid” in the eyes of many on the left.

We should note, however, that the Soviets did not invent Western anti-colonialist hostility towards Israel. Rather, this view took shape within the European New Left that emerged in the 1960s. The New Left tended to see Israel as a European settler-colonialist enterprise, and the Palestinians as the victims of British and Zionist imperialism. For the New Left, Palestine thus became a major cause alongside Vietnam, Algeria, and South Africa. The Soviet campaign drew on this current, but also helped shape it, infusing it with anti-Zionist imagery that frequently expressed classical antisemitic tropes.

Antisemitism in the Arab world

Besides the Soviet Union, the Arab world was another key site of antisemitism’s diffusion in the 20th century. Modern antisemitism had found its way here in the late 19th century, at first through the writings of Arab Christians. As the conflict between Jewish immigrants and Arabs in Palestine escalated in the 1920s and 30s, Arab nationalist leaders began weaponizing antisemitic propaganda, including the notorious forgery known as “The Protocols of the Elders of Zion”, to mobilize against the Jews. Humiliating defeats against Israel in 1948 and 1967 led to a major uptick in anti-Zionist and antisemitic discourse in the Arab world, as well as waves of violent anti-Jewish persecution leading to the exodus of up to 900,000 Jews from Arab lands, most of whom settled in Israel.

While antisemitism in the Arab world was secular and nationalist at first, the later growth of Islamism helped frame anti-Zionist and anti-Jewish hostility in religious terms. One notable result of this development was the 1988 founding charter of Hamas, which featured traditional Islamic Jew-hatred alongside explicit reference to the “Protocols”.

Into the 21st century

With the eruption of the Second Intifada in 2000, the latest phase in the long history of antisemitism commenced. Monitoring agencies in Western Europe and North America recorded a sharp rise in incidents of antisemitic violence and harassment, especially in France, the UK, the US, and Canada. Since then, incident counts have fluctuated from year to year on a relatively high level, often peaking following flare-ups in the Israeli-Palestinian conflict, such as the ones that occured last May.

The 21st century phase of antisemitism has not been without its share of far-right manifestations. However, the Soviet legacy of antisemitic anti-Zionism and the Arab and Islamic strains of the phenomenon, each with their own historical roots and circumstances, have come to shape the development in the past 20 years at least as much as the far-right variant. Knowledge about these legacies helps contextualize the events of last May, which revealed the ideological and ethno-cultural diversity of current antisemitism.

Johannes Due Enstad directs the project Comparing Histories of Antisemitism in Contemporary Europe (CHACE), funded by the Research Council of Norway.