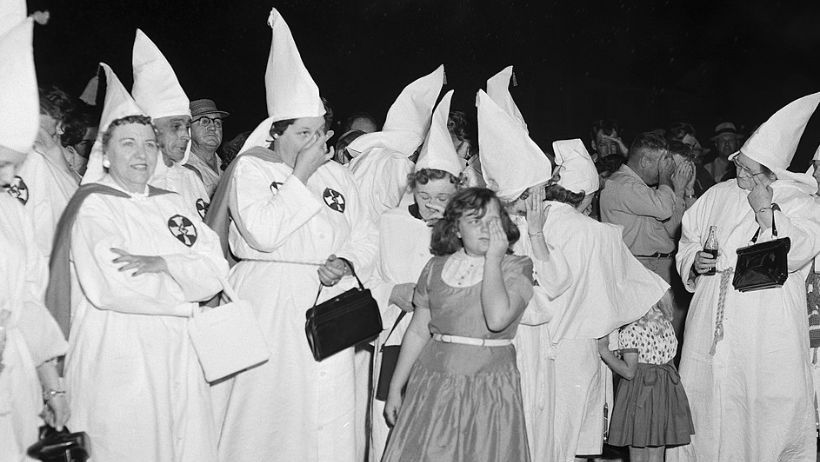 In a recent published article[i], our research team tackles that question by examining women’s experiences in U.S. white supremacism, including Ku Klux Klan, white power skinhead, neo-Nazi, and other racially extremist groups.  Our work is based on the lengthy in-person interviews that we conducted with 21 female former white supremacist group members.  To our knowledge, these interviews constitute the largest detailed original data set on this population.

We find different experiences for women who were pigeonholed into the white supremacist archetypical categories of mother, sex partner, and fighter.

The archetypical image of white women as mothers of the race was the most prevalent in our data and is pervasive in the propaganda of white supremacists.  Women categorized as racist mothers are pushed into support roles in white supremacist groups, such as providing food and creating social time.  They are rarely, if ever, asked to contribute their ideas about the direction or strategies of the group.  Some women in our study embraced this role, at least for a time, as did one woman who bore three children to support the movement’s agenda of increasing the number of white babies.   Other women did not passively accept the role of racist mother and insisted on a broader role within the group, although their efforts were rarely successful.  We also found that the movement’s emphasis on white women’s role as mothers created a dissonance among women members that eventually prompted many to leave white supremacism.  For some, it was the desire to provide a more socially and economically stable life for their children than was available in the marginal world of white supremacism.  For others, it was a reflection on the movement’s attacks on children that caused them to flee.  As one woman told us, “I thought about all those [white supremacist] magazines that I had sent out and how one of those magazines might have inspired someone to blow up a building or to have done something like kill a baby.  I was horrified.”

The archetype of white women as sexual partners (often derisively termed “whores”) is also powerful in white supremacism.  Indeed, white supremacist men deliberately try to recruit women as sexual partners. As a male former member related, “that’s the girls we wanted.  We wanted the rocker chicks… we’d bring them in and feed them some beer and whatever happened, happened.”  This archetype defined the roles of several women in our study, including those who worked as sex workers to support their husbands/male partners and the movement itself.  But even those women who took on perhaps the most debased position in white supremacism – forcible service as a sex worker for the movement – still exerted a sense of self at odds with the movement by taking on forbidden clients (such as black men) or working in areas in which movement men could not surveille them so they could keep more of the money generated by their work.  And some women manipulated their assigned place as movement whores to their advantage in other ways, as did one woman who told us that she got access to information that was off-limits to any but the top leaders of her group by being strategic in her sexual liaisons.

Our study also provides insight into the very poorly understood role of white supremacist women who adopt or are pushed into the archetype of racist fighter.   One woman described her entry into white supremacism this way: “I end up gravitating toward those guys just because they want to fight all the time and I want to fight, like I’m angry.”  Women who were categorized in the movement as racist fighters engaged in violence both on behalf of white supremacism through efforts to settle scores and protect territory for their group and to defend themselves and secure a better position within the group.  Another woman recalled her many episodes of fighting: “I frickin’ liked it… I liked the thrill of it… if one of my guys was on the group, I’d end up jumping in there and I’d end up taking hits to cover him.”   Even women who participated extensively in white supremacist violence, and seemed to embrace the role of racist fighter, often asserted limits to their willingness to follow the group’s expectations.  As one woman recounted in her interview, “I stopped going to [white power music] shows because of that stuff- drunk people fighting and stuff like that.  I don’t want to go anymore and a lot of things I stopped doing just because I don’t want to get into fights anymore.”

In summary, we find that white supremacism strongly circumscribes its female members’ roles to fit within movement archetypes of women as white mothers, whores, and fighters.  At the same time, we also find that racist women push back against the full impact of these archetypes in their own lives and try to create alternative ways of acting within the movement.  Yet, their ability to do so is quite limited.  White supremacism’s deep misogyny and its isolation from mainstream society powerfully circumscribe the experiences of women in this world, leaving them only limited alternative ways of acting.  However limited, the fact that women racists find any way to assert themselves against the movement’s expectations is remarkable in a world defined by a culture of threats and violence against women.  Still unknown is how archetypes of white mother, whore, and fighter operate in white supremacist movements that are increasingly connected through digital (internet and social media) forms rather than in physical spaces.

By Kathleen Blee
E-mail this page