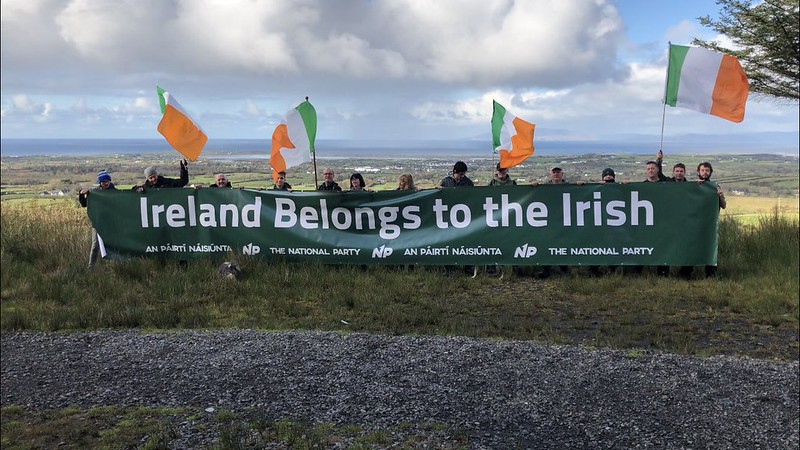 What connects a former Eurovision song contest hopeful, former journalist turned conspiracy theorist, and a sheep dog with its own Twitter account? The somewhat surprising answer is they are all linked to the labyrinthine world of the Irish radical right. The recent Irish general election has received significant international coverage, in particular due to the results achieved by Sinn Féin, a party which was formerly the political wing of the Provisional Irish Republican Army, but which, since the Belfast/Good Friday Agreement of 1998, has been a key participant in the Irish peace process.

But the election also attracted much speculation about how the proliferation of radical right-wing candidates, many standing on overtly populist, anti-political establishment, and/or anti-immigrant platforms, would fare in the contest.

In recent times, radical right groups have struggled to make a political breakthrough in Ireland, despite the post-2008 economic downturn and increased immigration to the country in the past two decades. This may be because emigration, due to a lack of economic opportunity, rather than immigration has been a more prominent concern. Indeed, even one of the earlier manifestations of the radical right in Ireland, a group called Architects of the Resurrection, had as much of a focus on stopping people leaving the country, as a concern about those who might come in. And Irish nationalism has perhaps been more assimiliationist than some of its manifestations elsewhere in Europe.

On paper, the pre-election concern about the potential of the radical right seems misplaced. Most such candidates received fewer than 1 per cent of votes in the constituencies they stood in. But what – or who – is the radical right in Ireland? And does its lacklustre performance in the recent election mean it can be discounted in the future?

The radical right in Ireland is nebulous at the best of times. Unlike earlier periods in the country’s history where organisations such as the Army Comrades Association (Blueshirts) were more readily identifiable, and could muster considerable numbers in public shows of strength, the social media age has made quantifying the influence, if not the extent, of the radical right a challenge.

In terms of organised political parties, there is only one that can be readily categorised as radicalright. This is the National Party (NP), led by Justin Barrett. Barrett is a long-standing anti-abortion campaigner and Eurosceptic, who has attracted controversy for attending events organised by neo-fascist organisations such as the National Democratic Party in Germany and Forza Nuova in Italy.

The NP embraces conspiratorial rhetoric around immigration, and states that its existence is, first and foremost, driven by the desire to preserve the Irish nation and the Irish people – the implication being that the “Irish people” may not exist at some point in the future, due to mass immigration and national decline.

The NP only stood ten candidates in the recent election. Barrett himself did not stand. His deputy, James Reynolds who revels in his description as “one of the most controversial figures in Longford [a rural county in the west of Ireland] farming” did stand in his home constituency, taking 1.7 percent of first preference votes. Thus the threat of the NP lies not in its current size, but the extent to which the issue of immigration or Ireland’s relationship to the EU becomes more politically salient.

Faring marginally better than the NP, was the Irish Freedom Party (IFP), which supports Ireland’s departure from the EU (“Irexit”). Among its election candidates included a recent immigrant to Ireland from the United States, and an anti-eviction activist from Dublin, famous for brandishing a hurling stick in his promotional materials during the previous European Parliamentary election campaign. Ironically, aping some of the policy platform of some of the British politicians it presumably seeks freedom from, the IFP advocates leaving the EU to “take back control” of “immigration”, “law-making” and “marine resources”. Tapping into a wider discourse common to the contemporary “culture wars”, the party champions free speech and decries a “culture of political correctness and shutting down debate on vital issues.”

Anti-Corruption Ireland (ACI) also fielded several candidates in the election that could be classed as radical right. ACI’s figurehead, Gemma O’Doherty, is a former journalist turned activist. O’Doherty is a noted hard-line anti-immigration campaigner. In common with many on the radical right elsewhere, she sees the hand of George Soros at work in the migration crisis and regards Islam as posing an existential threat to Irish culture, claiming that the voters in the constituency she stood as a candidate had voted “for their own extinction”. She received 2 percent of the vote.

Joining O’Doherty on an ACI platform in the election was veteran journalist and author, John Waters. Waters is also famous as the co-writer of Ireland’s Eurovision song contest entry in 2007, called “They Can’t Stop the Spring”, an uplifting number which celebrated the collapse of Communism. The song finished last in the finals.

More seriously, Waters, too, has voiced his concerns about changing demographics in Ireland. His recent reading has included Renaud Camus (of the “great replacement” fame). Waters took 1.5 percent of the vote in the Dublin constituency in which he stood for election, and compared the result of the election, which saw a rise in support for left-wing candidates, to an “alcoholic refusing to enter treatment”.

A plethora of other radical right candidates also stood on an independent platform. One of the most visible was Niall McConnell, a sheep farmer from the northern county of Donegal, who styles himself as a “revolutionary Irish Catholic nationalist”, and has taken the moniker of “The Irish Patriot”. McConnell distributes a newspaper of the same name. He has claimed that immigration reception centres are, in fact, the barracks for “an invasion force for the conquest of Ireland and to replace YOU!” Despite the hard-line rhetoric, and (somewhat ironic) links to former British nationalists, his electioneering material featured an innocuous image of him and his dog. A Twitter account called “Niall McConnell’s dog” appeared during the campaign, in which the “dog” distanced itself from its owner’s politics.

In summary, the recent Irish general election did not herald a breakthrough for the radical right. Some reasons for this include the ability of the political left to more effectively mobilise the electorate than the radical right. Left-wing parties, such as Sinn Féin, focused on problems in the healthcare system, the housing crisis, and the uneven nature of the economic “recovery”. These issues simply had much more salience with voters across several demographics than immigration. Equally, Sinn Féin, which seeks a united Ireland, is more likely to attract those with nationalist leanings than the radical right. Sinn Féin’s brand of nationalism is historically rooted in Irish society, whereas the rhetoric of the contemporary radical right is generally imported from elsewhere, and has not had time to crystallise into a distinctively Irish form that does not seem somewhat contrived – or, at least, not yet.

But the, at times, comical manifestations of this brand of politics should not distract us from realities of the ideology, and the tropes common to right-wing extremist movements elsewhere, that underpin and sustain it. If the online sphere is anything to go by, the radical right in Ireland are not counting on imminent success, but that does not mean they do not potentially have the stamina to play the long game.