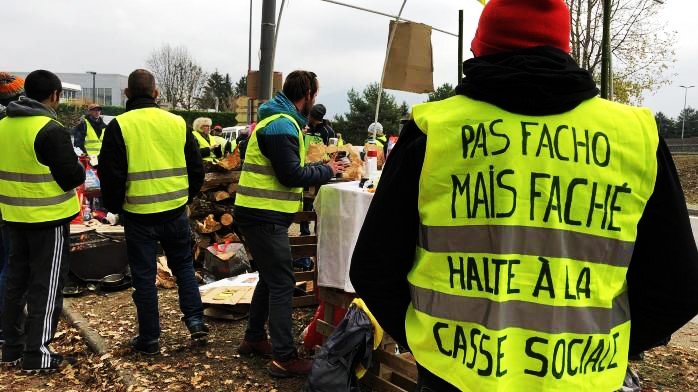 Activists wearing yellow safety vests, or Gilets Jaunes, started taking the streets in France in October 2018. As these uprisings could not be connected to any political party or to any clear political agenda, some commentators linked their grievances with the ethnocentric and ‘anti-establishment’ discourse of the Rassemblement National (formerly Front National, RN). After more than a year of demonstrations, and some attempts by Marine Le Pen to latch on to the Yellow Vests (YVs) the RN has failed to capitalize on this discontent suggesting that the relationship of the YVs with the populist radical right is probably not that obvious.

We argue that it is overly simplistic to associate the YVs with the populist radical right. While the ideology of the radical right is crucially informed by nativism, authoritarianism and populism, the YVs movement is not based on a single, accepted platform, and it talks very little about immigration and law and order issues. In addition, it is not just against the ‘establishment’ or democracy tout court but mostly concerned with institutional reforms (notably to improve the accountability of the executive). Our claim is supported by the findings of an ongoing research project at CEE & médialab of Sciences Po.[1]

On May 29, 2018 a petition "To lower fuel prices" appeared on change.org. Few months later, the speed limit of 80 km/h on countryside roads came into force. On October 10, two citizens (Éric Drouet and Bruno Lefevre) launched an open Facebook call for a "national blockade against rising fuel prices". During this period, grassroots protests took place in different parts of France to express discontent towards the speed limit on secondary roads, and to rising fuel prices. On October 24, the high-visibility yellow vest was proposed as a symbol of the movement. After three weeks, French president Emmanuel Macron suggested holding a series of national consultations (the Grand Débat National) and eventually dumped the increase in fuel taxes that triggered discontent. Still, demonstrations continued and expanded across France (see Figure 1 and Figure 2).

Since the early days, Marine Pen tried  to latch on to the YVs’ discontent, but her attempts failed. Why? The concept of “radical right populism” has been introduced by Cas Mudde to refer to collective actors whose ideology encompasses three main features: nativism, authoritarianism and populism. Nativism is a worldview positing that states should be inhabited only by the native people, and that non-native (personas or ideas) are a threat for the survival of the national community. Authoritarianism refers to the worldview seeing crime prevention, order and punishment as the crucial conditions to keep society together. In its minimal understanding populism refers to a set of ideas “that considers society to be ultimately separated into two homogeneous and antagonistic groups, ‘the pure people’ versus ‘the corrupt elite’, and which argues that politics should be an expression of the volonté générale (general will) of the people”. In a radical right populist worldview, nativism informs who the people (and the elites) are, and the reasons for this normative opposition. For example, radical right populist parties blame elites who are accused of sympathizing with migrants. How much do the YVs talk about these flagship issues of the radical right?

The quest for institutional reforms

To shed light on the agenda of the YVs, we use Natural Language Processing and network apportionments to analyze the content of 10 million posts appeared on 892 Facebook groups associated with the YVs between November 2017 and October 2019.  The results appear in Figure 3. The top part shows the percentage distribution across topics found in the posts of all the Facebook pages overtime. The bottom part is a measure of proximity between groups in the space of topics discussed in their posts.

Our analyses suggest that the YVs have different claims and these change overtime (at least on Facebook). Among their audiences, issues related to ‘Immigration and Integration’ receive little attention. While overtime the posts emphasize issues related to ‘State Repression’ these are about containment of demonstrations, whereas the category ‘Internal Security’ referring to crime and terrorism prevention is almost not existent.  Over the whole period, the most prominent issues are ‘Institutional Reforms’. Posts call to introduce a Citizens’ Initiative Referendum (RIC) and to reform the French political institutions to ensure accountability of political representatives and, in particular, of the executive. This suggests that rather than being just against ‘the establishment’, the YVs and their sympathizers voice more articulated policy grievances. In line with these results, the distance between the discourse of groups shows that during the first protests groups diversified their discourse. Later, after November 2018, groups began clustering again around discourses that address relatively more similar topics. In sum, when they have the opportunity, Facebook users associated with the YVs  express more articulated claims.

Discontent might be different from being radical right populists

Some commentators have associated the Yellow Vests in France with radical right and populist politics. We find that on Facebook they do not prioritize immigration and law and order over other issues and that they are not just against the ‘establishment’ or ‘old’ politics. At least on Facebook, the audiences of the YVs voice some articulated concerns about the institutional design of France’s Fifth Republic, confirming the findings of other studies on social media audiences, offline activists and sympathizers. Additional analyses also show that the media the YVs are citing on Facebook (when sharing a story in their posts) are also spread over the full political spectrum and even tend to get more leftist with time. In sum, these grassroots mobilizations can hardly be connected just to a radical right populist agenda which would prioritize nativism, authoritarianism and populism. This is probably why, so far, the RN and Marine Le Pen have not been appealing to most of them.

More research is needed on the YVs and on similar movements emerging in the aftermaths of the Great Recession to voice discontent and call for social change. It is tempting to view these upheavals simply as a form of radical right populism, against immigration, “old” politics or democracy itself. This may not always be the case. Protesters are not just ethnocentrist, authoritarian or anti-elites. If they have the opportunity, they might support an alternative inside the political system that is more in line with “what the people want”.

[1] This research has been funded by the Fondation Nationale des Sciences Politiques (SAB-YELLOWPOL). It also benefited from the SSRC grant “I read it on Facebook”.