John Erik Fossum is the co-editor of Federal Challenges and Challenges to Federalism by Routledge. 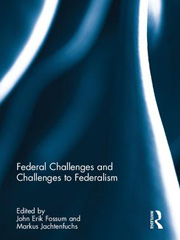 The chapters in this book were originally published in the Journal of European Public Policy, volume 24, issue 4 (2017).

Discussing what we may learn from thinking about the EU in federal terms represents a two-fold challenge. It is on the one hand a matter of establishing ‘how federal’ the EU is (the EU’s federal challenge). On the other, the EU has federal features but is not a state, thus raising the question of whether federal theory and practice may have to be adapted to take proper account of the EU (the EU’s challenge to federalism). The contributions to this collection supplement and extend existing scholarship through focusing on two important lines of inquiry. The first focuses on the relationship between federalism and democracy, with particular emphasis on how federal systems respond to and deal with citizens’ interests and concerns, within and outside the political system. Representation is explored both in the process of federalization, and as a feature of established systems. The second line of inquiry places the emphasis on the relationship among the governments of federal systems. The focus is on intergovernmental relations, and the particular merits that emanate from studying these from a federal perspective. This book was originally published as a special issue of Journal of European Public Policy.

1. Federal challenges and challenges to federalism. Insights from the EU and federal states

3. Patterns of Multilevel Parliamentary Relations. Varieties and Dynamics in the EU and other Federations

4. Executive-Legislative Relations and Inter-Parliamentary Relations in Federal Systems – Lessons for the European Union

5. Representation in the EU: multi-level challenges and new perspectives from comparative federalism

7. Intergovernmentalism in the European Union: A Comparative Federalism Perspective

9. Europe as a multilevel federation