The findings in the paper, written by OSIRIS researchers at Statistics Norway, shows that more R&D spending in Norway leads to higher productivity as firms improve their capacity to learn from other domestic firms as well as from firms in other countries. As a result, GDP, real wages and consumption will increase in the long run. 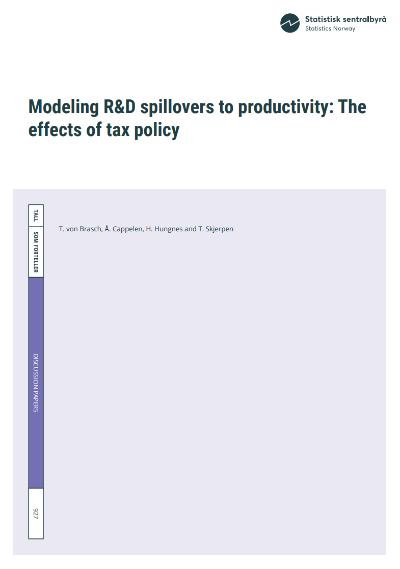 Many countries including Norway, has a target for R&D spending as share of GDP. The reason for government interventions to stimulate R&D is the view that this investment improves learning and knowledge between firms and industries beyond what markets take into account and what we can observe in terms of prices on goods. Knowledge spread through the economy as firms buy inputs from other firms. For example, higher productivity in transport is often transferred to users by lower prices and lower costs is then transmitted to other industries and users by traditional input-output channels.

In this study we first analyse statistically whether higher R&D capital contributes to productivity beyond what you can expect from a higher capital stock per se. We find the increase knowledge due to a more educated labour force and more R&D capital in Norway contributes roughly as much to productivity as the potential for learning from what other countries do. In addition, the more knowledge there is in Norway, the better are Norwegian firms able to adapt foreign knowledge.

The statistical analysis is then included into a large scale economic model for the Norwegian economy. Using this model we study the effects of tax credits and tax deduction rules in the Norwegian tax code for R&D investments by Norwegian industries. We find that more generous tax rules stimulate R&D investments significantly, but it takes quite some time until R&D capital stocks increase enough so that firms reap the benefits in terms of higher productivity. In the long run this leads to higher GDP, real wages and consumption.