Institutional reforms and their effect on legislators' behavior. The Israeli experience, 1992-2011.

Do electoral systems and intra-party candidate selection procedures influence the degree to which parties act in unison? Whereas the theoretical literature is quite clear about the hypothetical effect of these institutions, empirical evidence is mixed. 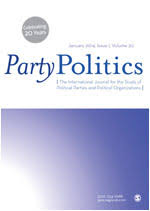