How Ukrainian refugees are described in the Russian press

Pro-government Russian media tells about Ukrainian refugees being evacuated to Russia from Ukrainian Nazis. The papers fail to report on millions of Ukrainians fleeing from a Russian invasion to neighbouring countries in Europe. 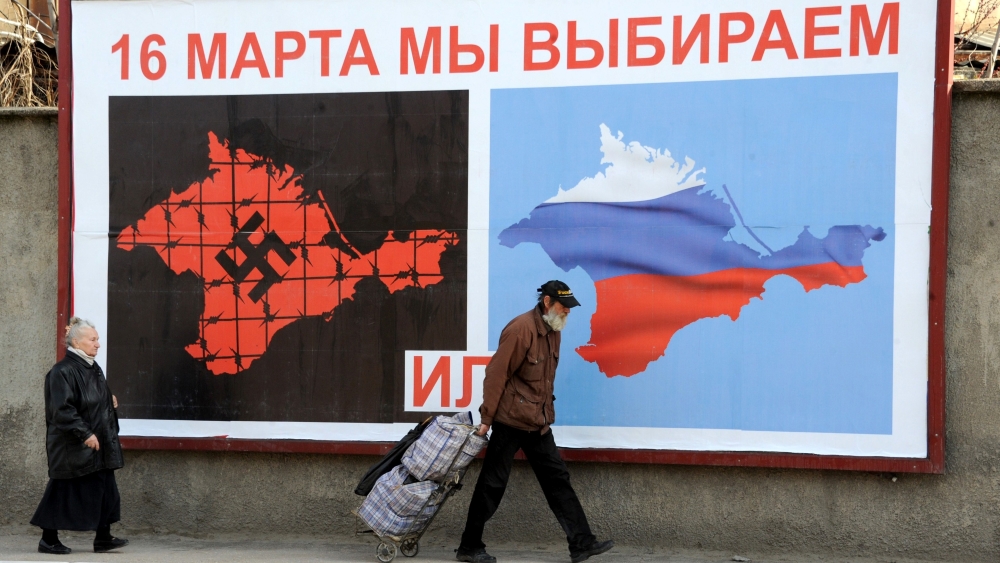 Rhetoric or propaganda? People pass a poster in Sevastopol on March 11, 2014 reading "On March 16 we will choose either... or...", depicting on the left side Crimea in red with a swastika and covered in barbed wire and n the right hand side Crimea with the colors of the Russian flag. Pro-Moscow lawmakers in Crimea voted for independence from Ukraine on March 11 in a precursor to a referendum on March 16, which led to Russian annexation of the disputed peninsula (PHOTO: AFP/ VIKTOR DRACHEV).

Natalia Moen-Larsen has just submitted her doctoral thesis, Brothers and Barbarians: The social construction of “refugees” in Russian newspapers, 2014–2015, at the Department of Sociology and Human Geography. In her thesis, she examines how refugees from Ukraine were described in Russian newspapers in the period between June and September 2014.

Must be “saved from the Nazis”

“I chose this period because it was right after large numbers of refugees from Ukraine started arriving in Russia. In my thesis, I contend that the war in the Donbas in 2014 came as a shock to many Russians, and that ideas about Ukraine had to be radically altered. In the summer of 2014, the Russian public, the media and politicians were in a process of interpreting a new refugee picture – the refugee from Ukraine,” Moen-Larsen explains.

“There’s a striking difference in this compared to the current reporting on the war and its victims.

Much has changed since 2014. Russia has now openly deployed military forces, invaded parts of Ukraine, and there is full-scale war between the two neighbouring countries. In 2014, the war was confined to the Donbas region, and at that time, many defined it as a civil war, even though it had also been provoked by the Kremlin.

Among other things, she mentions that new laws introduced in March make it illegal to use the word “war”, when referring to the war in Ukraine. Instead, newspapers are forced to use the term “special operation”. The Kremlin-critical newspaper Novaya Gazeta in Russia was printed for the last time in March this year.

“Specifically concerning the groups of narratives that I found in the material from 2014, I would point up the following changes from then to now: Narratives of the war have been changed to narratives of a “special operation”. The reporting is still largely focused on the reception of refugees from Ukraine in Russia. But in these narratives, the refugees are described as evacuated to Russia. Very few pro-government newspapers are writing about refugees from Ukraine who flee to Europe. In addition, the stories about right-wing radicals and Nazis in Ukraine have become far more numerous than what I observed in the material from 2014.

Moen-Larsen found three main types of stories back in 2014:

The first-named narratives describe the war from the refugees’ perspective, and cover bombing, shooting, destruction and death. In these narratives, the refugees are portrayed as the victims of war. The message is that the refugees have a legitimate reason for fleeing to Russia.

In narratives about reception and aid, humanitarian actors are in focus. These are, for example, volunteers, organisations or Russian society in general. These describe all the aid Ukrainian refugees receive in Russia. The refugees themselves are portrayed as passive recipients of this aid.

“One implication of these narratives was that assisting refugees from Ukraine is morally the right thing to do,” says Moen-Larsen.

An enemy in the West

The last category of narratives concerns international relations. In this context, the narratives construct a symbolic adversary, giving rise to adversarial relations between Russia and the West. According to Russian authorities and pro-government voices, the West supported the violence perpetrated by Ukrainian forces in the Donbas in 2014, which caused thousands of Ukrainian citizens to flee to Russia. In this narrative, Ukraine is referred to as either a victim of Western manipulation, or as infiltrated by right-wing radicals and Nazis, while Russia is portrayed as aiming to restore peace to Ukraine and rescue refugees from the country.

“All three newspapers carried a disproportionate number of reports on refugee reception and aid in 2014. But the newspapers differed in the slant of their stories covering war and international relations."

For centuries, Russia has defined its identity vis-à-vis the West, and much research has been done on this. For a long time, Russia’s relations with the West have had periods of good relations that were then replaced by periods of discord. Russia is both part of Europe and outside it.

We’re now in a period where Russia’s demand to be recognised as a superpower is not accepted by the West. In this context, Russian media stories are increasingly characterised by conspiracy theories. These reinforce the notion of fundamental differences between Russia and the West, and of Russia’s national greatness, which the West is allegedly seeking to undermine,” concludes Moen-Larsen, who is currently a senior researcher at NUPI (Norwegian Institute of International Affairs).