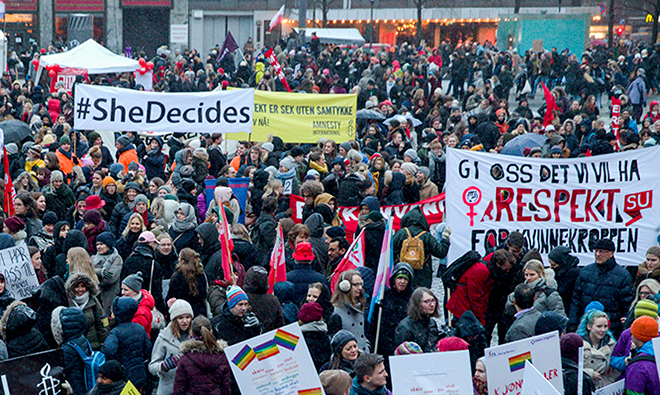 The use of social media has been an important reason for the increased interest in feminism, says professor Cathrine Holst. Photo: NTB Scanpix

- In the early 2000s we saw a feminism that was characterized by individual narratives. It was said that women are very different from one another and the question was raised whether they really had anything much in common. Today, feminist narratives have a much more collective feel, says sociology professor Cathrine Holst of the Department of Sociology and Social Geography at the University of Oslo.

In her book, "What is feminism?”, which was recently republished in a new edition, she writes about how feminism has developed throughout the ages. We have now come to the so-called fourth wave, with tendencies that are continually disputed and uncertain.

The first wave of feminism was characterized by the struggle for formal, legal rights. This was played out in the 17th and 18th centuries, central to which was the campaign for women's voting rights.

Today feminist narratives have a much more collective feel.

The second wave swept much of the West in the 1960s and 70s and included the fight for equal pay, family policy, abortion rights and the fight against domestic violence. There was an upsurge of new social movements and the emergence of radical feminism, that promoted the theory that all men suppress women through the "patriarchy" and that a radical upheaval of society was necessary.

The third wave took place around the millennium and marked the desire for more diversity in the feminist debate. Feminism was criticized as a western middle class project, and a heterosexual project. Many have pointed out individualism and the cultivation of difference as essential features of the third wave. There was also a more theoretical exploration of the role of women.

Holst emphasizes that the classification of the waves of feminism implies gross simplifications. For example, it includes primarily western countries, although many of the trends have also been visible on other continents.

However, it paints a picture of trends that have been present, to a greater or lesser extent, in many places. Where do we stand today?

A new feature is the massive mobilization of feminism in social media.

"It's always hard to say what characterizes an era while you're still in the middle of it. Some of the features of the third and fourth waves of feminism overlap. "Intersectionality" is one example - the idea that oppression based on gender, class, sexuality, ethnicity is interrelated, says Holst.

This approach appeared in the 1990s but remains central today, according to Holst.

- A new feature, however, is the massive mobilization of feminism in social media. We have seen this unfold in the #Metoo campaign, and we also saw ahead of the demonstrations when Donald Trump was inaugurated as president.

January 21, 2017 may have been the biggest day of protest in US history. Between 3.3 and 4.6 million participated in the peaceful women's marches. There were also large demonstrations in other countries

Holst believes she sees clear parallels between today's mobilization in social media and radical feminism's mobilization in the 60's and 70's. At that time, other means were used, but women were united as they are today.

- Today's Twitter campaigns, like #Metoo, tell women about their common experiences. Whether actors or cleaners, women are saying that they are all in the same boat, says Holst.

For example, it is said that "all women" have been victim to sexual harassment, she points out.

- They paint the picture that men still have the power and they use it against women. This is reminiscent of the view of society as patriarchy that radical feminism promoted.

In recent years there has also been a boom of activity on the women's day 8 March.

"For a while people thought that the 8th of March was going to die out, but in 2014 and 2015 it attracted a huge turnout. At its peak in Oslo in 2014 10,000 people turned out for a demonstration at Youngstorget, many of them to express opposition to the government's proposal to allow doctors to reserve themselves from referring women for abortions, "Holst says.

The use of social media has been an important reason for the increased interest.

She believes that the use of social media has been an important reason for the increased interest.

"We also see that groups of women who were previously absent from the debate now more often discuss feminist issues, Muslim women, for example. Additionally, there are more men who say they are feminists and we have got a new movement of “bluestockings”, who defend gender equality from a liberal and conservative point of view. Being concerned with practical policies is also not as "out" as it was during the most self-reflective phase of feminism around the turn of the millennium.

Not an unambiguous time

There is much indication that this is a boom time for feminism. But there are also signs of setbacks, Holst emphasizes.

"We do not live in a time that is unambiguous for feminism. For example, we see an emergence of populist politics that is clearly hostile to gender equality, feminism, international cooperation and human rights. The latest events in Poland are one example of this.

In addition, Donald Trump has moved in to the White House and neither China, Russia nor the misogynistic islamist regimes that we currently see are going to campaign for equality.

100 years from now it is possible that we will not look at our time as the fourth wave, but as a time of struggle, where differing views opposed one another and were in conflict. Perhaps, increasing polarization is the correct diagnosis