Missing the Link? On the Political Economy of Nordic Egalitarianism 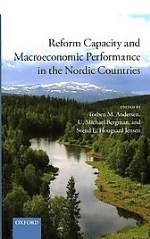 Is Nordic equality the result of egalitarian preferences and homogenous populations? We believe not. Nordic equality is in our view a result of special institutions rather than special populations, If other countries had Nordic institutions, and in particular Nordic labour market institutions, they would have had similar egalitarian outcomes. Yet, many observers miss the link between redistribution of gross earnings in the labour market and the final distribution of disposable income. They overlook how coordinated wage negotiations lead to small wage differentials and a high average wage, fueling the support for further redistribution via generous welfare benefits. In this short essay we emphasize this missing link for three reasons.

First, we want to make clear how the link associates equality with exposure to international competition. The main coalition that has supported the link from the 1930s till today consists of unions and employers in traded-goods industries.

Second, we argue that the link is highly relevant. In fact it must be considered decisive for the political economic equilibrium of the Nordic equality. It ties equality of disposable income to wage compression both directly, as wage compression determines the gross earnings distribution, and indirectly, as it raises the political support for redistribution in the welfare state (Moene and Wallerstein, 2001, 2003). In addition comes two important feedbacks: one, were higher average wages help sustain the willingness of unions to accept wage coordination with compression; and another, where a generous welfare state empowers weak groups in the labour market leading to ore wage compression from below (Barth and Moene, 2009;Barth, Moene and Willumsen, 2014).

Third, we expect that the link may be missing in the future. Having argued that it is nevessary for the Nordic style equality, we discuss how structural change reduces the number of workers employed in traded-goods industries, weakening the export-led coalition. More labour-saving technical change in commodity production than in service provision (the Baumol effect) may in addition be mirrored by diminishing power to exporting sectors relative to non-tradable sectors. Declining employment in the export sector changes the power inside the union movement and the employer associations, and in politics more generally. All this can threaten the institutional equilibrium. If this occurs, Nordic style equality may paradoxically become less distinct as less of the workforce is exposed to international competition.

As we proceed we try to make the mechanism of the missing link clear by addressing some possible objections that may be raised against its importance.