What makes a far right demonstration? A methodological focus on history, numbers and interactions

From fascistic rallies in the 20s, to the recent storming of the US Capitol: far right demonstrations are complex events, with large societal and political implications. German sociologist Fabian Virchow highlights the importance of analyzing how many people attend such demonstrations, and how they interact with their environment, in order to reach a more complex understanding of far right protest in their historical context. 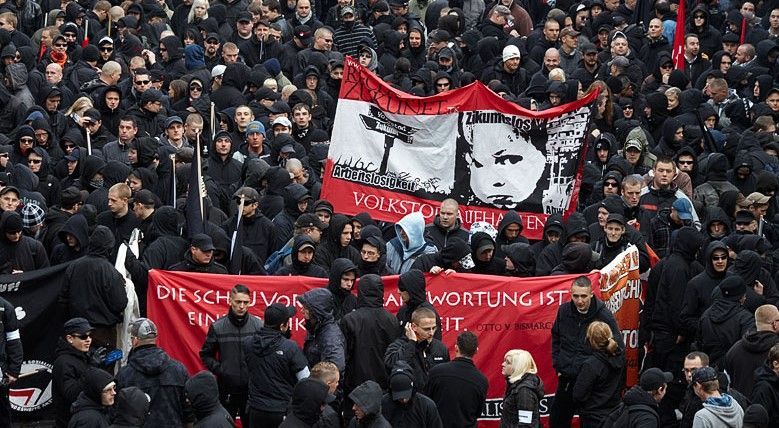 This blog post is based on the webinar series Researching the far right: methods and ethics, co-organized by C-REX (University of Oslo) and PERIL (American University). For more information, click here.

All over the world, demonstrations are an important form of political action for reactionary and extreme right forces. Early this year, the march to the Capitol in Washington, DC made global headlines. Some will also remember the rally by white supremacists held in Charlottesville, VA in 2017, the Salem marches in Sweden held in the early 2000s, or the annual marches in Hungary celebrating the tens of thousands of dead Wehrmacht and Waffen SS soldiers who fought alongside the Hungarian army against the advancing Russian forces.

The historical importance of protest

From a historical perspective, rallies and public manifestations played an important role in the course of the formation process and the rise of fascist forces in Italy and Germany in the 1920s. The October 1922 March on Rome, Italy, far less glorious than claimed in the subsequent myths, and the Hitler-Ludendorff Putsch (Marsch auf die Feldherrenhalle) in Munich early November 1923 might be referred to as the most prominent cases.

Not in the least, this makes it necessary to study them scientifically. Rallies and demonstrations are not just about bringing as much people as possible out in the streets for making a particular claim. They are complex social interactions taking place at a particular date and at a certain, often meaningful, place following a carefully designed choreography. They have a history in the sense that the political issue they are referring to might have led to other forms of protest and contentious politics before activists chose to hold that particular demonstration. The particular event might also be the starting point of further rallies and public manifestations (or other kinds of political action). Investigation of far right rallies, therefore, needs to also address the pre- and post-histories of particular events.

When a (far right) public manifestation takes place, there are further interactions, each of which is worth to study in detail. Interactions take place between speakers at a rally and the audience. It might be that the speaker wants to incite the audience to take action. S/he might even declare a certain individual to be a target that rage should be directed against. An observer of that interaction might also notice if a particular political issue and a certain way to address it provokes the highest level of applause. It is also possible that a speaker bores his audience. For example, Christian Worch, who played an important role in the German neo-Nazi movement from the mid-1970s onwards, tended to hold long talks. He liked the role of the somewhat intellectual speaker; but many of the less educated skinheads found that dull and were happy once the demonstrations moved further. Speakers might also try to address people who are passing by or who listen out of curiosity.

Interactions also occur between the past and the present: in line with historical examples, some of today’s neo-Nazi groups try to repeat the performative acts of the former Stormtroopers, the German Nazi Party’s original paramilitary wing. Marching in unison, they would use visual as well as acoustic means of expression to convey meanings such as order and discipline, activism and a sense of sacrifice, faith and devotion, loyalty and commitment, struggle and militancy, power and strength. Within the same rally, participants will also engage with one another. Some know each other from earlier events; participating and talking to each other again might strengthen bonds. I have also watched younger neo-Nazis who respectfully regarded older Nazis who had served the Nazi regime as SS men.

Far-right demonstrations also engage with other actors present at the scene, such as security forces. In principle, the far right has a positive attitude toward the security organs; in this respect, appeals can also be observed that police officers should side with them. At the same time, there are several examples where the police had been attacked violently claiming that they are part of the multicultural system and acting on behalf of a liberal political elite. Being attacked by far right activists is increasingly true for journalists as well; in Germany, the majority of such attacks are coming from right-wing extremists at demonstrations. But, of course, far rightists have their own media outlets. In growing numbers, there is live-streaming transmission of rallies through right wing YouTube channels.

Protective thugs and symbolic locations
In cases of counter-protest, interaction can range from situations in which not even a visual contact is made, to different levels of verbal or physical interaction – from shouting at each other to small scale attacks to larger brawls. Here, often the police comes in as third party. Attacking or being attacked might take place also when traveling to or from a demonstration. Stormtroopers in the 1920s had groups of like-minded, not-uniformed young men around their own marches to protect themselves (called ‚Wadding‘), but who also attacked people they believed to be Jews. Similarly, some of today’s neo-Nazi rallies are accompanied by groups of thugs, who are specifically on the lookout to see if they can attack antifascists.

Finally, there is also spatial interaction. Have the organizers chosen a place or a demonstration route that somehow relates to historical or symbolic places? Is it passing a synagogue? Is it taking place in front of a particular government building? Is its main purpose to reach out to potential voters? This might lead to the decision to hold it in a densely populated area with a certain social composition of the population living there. On the other hand, places where neo-Nazis often show up for rallies might be aligned to historical events. Such was the case with the Bavarian city of Wunsiedel. For many years it was the place of rallies commemorating Rudolf Hess. Hess was buried in Wunsiedel after his suicide in 1987; the town then became a pilgrimage site for neo-Nazis. The annual demonstrations were sometimes attended by several thousand neo-Nazis from all over Europe. Only with the reburial did this come to an end.

Not only these many interactions, but numbers too, are of great political relevance. When about 30,000 people, many of them right-wing extremists, demonstrated in Berlin in the fall of 2020 against the measures to contain the Corona pandemic, the organizers claimed that over a million people had taken part. They even tried to prove it with aerial photographs. In many other cases, the disparities might not be that large, but often the number of people who have attended the rally is disputed.

Numbers count. They do in several ways. It is not only the absolute number that counts. It also important if more or less people show up than expected or publicly announced. If the number of counter-protestors is only a little bit higher than the number of far rightists, they may count that as a symbolic victory – especially in cases in which trade unions or other associations with a large number of members have called for counter-action. Numbers, therefore, should get attention by researchers (see table below).

From neo-Nazis to Hindu nationalists – a need for comparison

However, counting comes with some methodological challenges. Participants may join the event only after it has started or leave it earlier. In the case of demonstrations through inner-city areas where there is also an audience, it is not always possible to distinguish who is actually participating. Possible solutions to this issue is to work with a range (750-850) instead of an exact number (810), or to make use of new digital methods, by for example counting the number of cell phones present in the area of the demonstration.

Of course, there is a huge amount of specificity regarding the country such rallies take place. A white supremacist rally in the U.S. with armed protesters wearing bulletproof vests definitely looks different from a neo-Nazi rally held in Norway or Germany, trying to re-enact the Stormtroopers of the late 1920s, or a mass action staged by the Hindu nationalist RSS. Therefore, it would be worthwhile to do more comparative research on this issue, in order to better understand the contextual drivers of far-right protest.