Kinder, Kirche and Küche - Gender and family rhetoric of the German far right

Far right actors often rely heavily on traditional narratives about gender and family, whilst simultaneously weaponizing women’s rights and gender equality in pursuit of an anti-immigration and anti-Islam political agenda. In a recently published article, Katrine Fangen and Lisanne Lichtenberg explore this tension within the rhetoric of various German far right organizations. 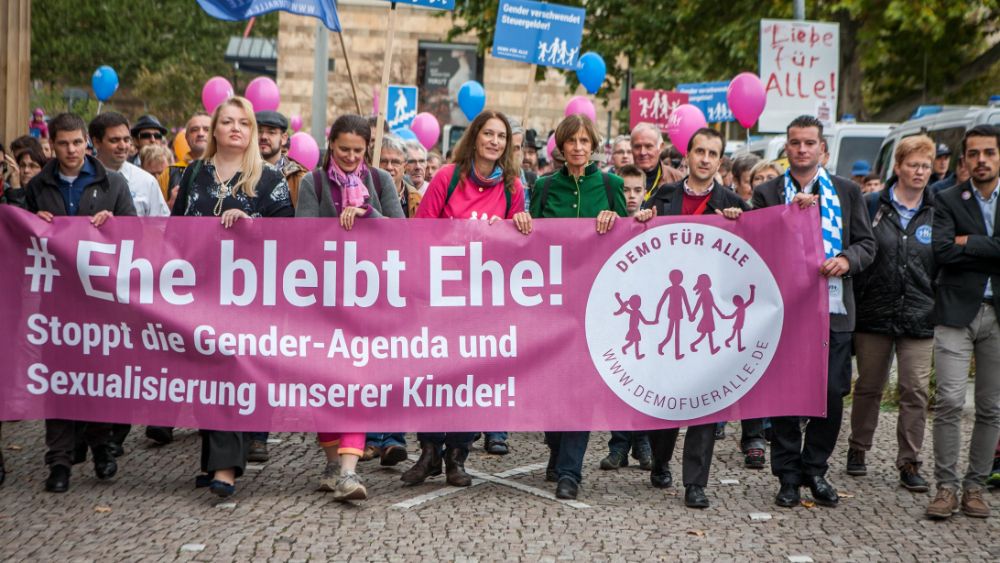 German 'Demo fur Alle' protest against the 'gender agenda'. These anti-gender protests have been attended by members of AfD, NPD and IBD. Image: Demo fur Alle

In Germany, the number of far-right, racism-motivated acts of violence is high, particularly since the reunification in 1990. However, the German far right spectrum consists of a variety of different organizations, ranging from illegal and violent actors, to (mostly) non-violent and legal far-right parties and organizations. These different types of organizations all play different, but important roles in shaping social narratives about gender, family and immigration. Hence, we have reviewed the family policies and views on gender roles, as well as the views on Muslims, of two German far right parties (Alternative für Deutschland and Nationaldemokratische Partei Deutschlands) and their youth organizations, as well as one anti-immigrant social movement organization (Identitäre Bewegung Deutschland).

Alternative für Deutschland (AfD) is a populist right party, which during the last election became the third-largest party in Germany. Since an internal party split in 2015, it has become increasingly anti-immigrant and far right. Junge Alternative für Deutschland (JA) is the official youth organization of the AfD. The Nationaldemokratische Partei Deutschlands (NPD) has been a far-right party ever since its foundation in 1964. The party is openly anti-constitutional and promotes both racism and antisemitism. Since 2016, the NPD is no longer represented in any German Landtag. Still, it remains the most important and largest far-right party in Germany in terms of membership. The Junge Nationalisten (JN) is the official youth organization of the NPD. Finally, the Identitäre Bewegung Deutschland (IBD) was founded in October 2012 as an offshoot of the French organization Génération Identitaire, and is rather single-issue-oriented: the organization emphasizes the protection and maintenance of German national identity, through restriction of immigration. The domestic intelligence service in Germany classifies the IBD as right-wing extremist and is keeping the organization under observation owing to the organisation’s violation of the principle of democracy.

Although differing in their political and ideological orientations, political influence, and size, all these organizations can be regarded as belonging to the German far right. From time to time they even support the same political campaigns, driven by similar anti-immigration and anti-Islam standpoints. In examining the party programmes, websites and information brochures of these organizations, we were struck by the centrality of family politics, opposition to gender ideology and the importance of gender images in their construction of differences in relation to Muslims and Islam. In fact, gender and family issues constitute about one-third of the content of the political programmes of European right-wing populist parties.

Women as mothers: the honour and duty to give birth

In nationalist far-right narratives, the family is seen as important for the stability and continuation of the nation. In its party programme, the AfD expresses concern about the disappearance of ‘normal’, medium-sized families and the fact that, as a consequence, the ‘indigenous population’ is shrinking. Restricting immigration and increasing the birth rate among the native German population are seen as important measures to counter the trend of the shrinking (ethnically white) German population. Thus, not only does the party emphasize national origins, it also promotes a ‘pure’ German nation.

AfD calls for policies that would support families with many children and make it possible for one parent to stay at home. Whereas the AfD thus promotes family-friendly policies in more gender-neutral terms, the NPD refers only to women in the context of childcare and the household, and offers more specific ideas for maternal support, such as providing an income for mothers. Interestingly, the youth sections of the two parties promote the most conservative and traditional image of women. For example, the JN explains that the German woman stands by her man’s side: as mother or companion, at difficult times and in times of danger. The group calls women the ‘holy source of German strength’ and explains that motherhood ‘is not a woman’s degradation: it raises women to immortality’. It is therefore both an honour and a duty to give birth.

Even though all five organizations we have studied support a conservative family policy, the rhetoric of the IBD and the NPD is more explicitly ethno-nationalist, sometimes even with clear racist connotations. One of the IBD’s main aims is ‘the struggle for the preservation of the ethno-cultural conditions for the survival of the peoples of Europe’. In NPD’s party programme, it is stated that the family is the ‘bearer of the biological heritage [and the] nucleus of the nation’.

German (white) women are not only portrayed as mothers, they are also perceived as possible victims of assault and rape by Muslim men. The organizations raise the question of how German women can be protected from asylum-seekers who regard them as ‘fair game’ (Freiwild). This expression often occurs with reference to the incident that took place in Cologne on New Year’s Eve 2015, when groups of young men sexually assaulted and robbed women and girls. The media debate after the Cologne incident entailed a mainstreaming of the view of Muslim men as sexually deviant and dangerous, as exemplified by the neologism ‘rapefugee’, which was used in many media outlets following the Cologne incident.

To enable women to defend themselves, several local IBD and JN groups have distributed free pepper sprays to women, and the AfD asks whether women should no longer go out anymore without an escort or whether a curfew for women should be imposed for their protection. Protecting women from immigrants is claimed to be necessary to preserve the ‘purity’ of the nation. On its official Facebook page, the AfD stresses that male asylum-seekers do not know how to treat girls and women. The IBD warns that asylum-seekers import their aberrant worldviews and values to Germany, thereby posing a threat to German women, who become the potential victims of these ‘rapist’ Muslim newcomers. These organizations systematically construct negative images of male asylum-seekers and Muslims based on their cultural origin, seeking to present them as a threat to German women, society and values.

Headscarves as a symbol of oppression

Discourses about the oppression of Muslim women have become a widespread and mainstream phenomenon, for example in the form of heated debates on whether to ban the Muslim headscarf (hijab) or burqa in various European countries. This concern for Muslim women is even more prevalent in far-right discourse, in which women’s underprivileged position vis-à-vis Muslim men is highlighted. The AfD in particular is concerned about Muslim veils as symbols of gender inequality. Former party leader Gauland regards Muslim headscarves as ‘alien and backward symbols’. Thus, the party uses Muslim headscarves to show how much the Muslim culture differs from German values, which include gender equality and women’s right to self-determination. Muslim women are constructed as oppressed, demeaned victims of their misogynistic religion.

The peculiar juxtaposition of conservative stances when it comes to family policies and, at the same time, a more liberal rhetoric regarding gender equality as an argument against Islam is typical not just of the German far right, but also of the far right in other European countries. Gender roles and family politics are issues through which radical populist right parties can ‘showcase the core elements of their ideology’. Even though they support women’s rights, these parties also very explicitly embrace traditional family structures and strongly oppose contemporary forms of gender policies that support same-sex marriage, reproductive rights and gender quotas. In this sense, there is a tension between what could seemingly appear as liberal positions and more conservative stances when it comes to family politics.

When we examine the manoeuvring of the German far-right organisations between using women’s rights arguments against Islam on the one hand and supporting traditional gender roles on the other, it seems that they have a hard time finding their right place in the continuum between liberalism and conservativism. Germany’s far-right parties appear to have a more instrumental take on the issue of gender equality than, say, right-wing populist parties in Scandinavia, where gender equality is a value that is explicitly embraced.

It seems convenient for German far-right parties to draw on the gender-equality argument when positioning their policies against Muslims and Islam, whereas in their more general family policy, the traditional emphasis is more pronounced. Far right organizations also explicitly hijack feminist arguments by claiming they are ‘the true feminists’, who protect women from the hordes of foreign men who threaten women’s security, and respect women who take care of children and the household.

Overall, it has become evident that German far right organizations manage the tension between support for women’s rights and traditional family policies by proposing their own definition of what support of women’s rights means, in the same way as some groups of far-right women have done earlier, where their version of women’s rights are linked to the rights of the mother, and also of women to move freely around in the city. It is in this sense they state that German culture is superior when it comes to women’s rights, while Islam and non-Western cultures are portrayed as primitive, misogynistic, patriarchal and inferior.