FARPE is a cross-national research project providing systematic knowledge about the nature, evolution and characteristics of far-right protest in Europe between 2008 and 2018. 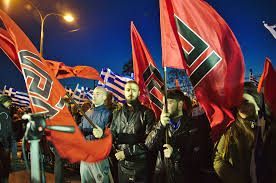 In line with C-REX’s engagement in the study of far-right parties and movements, the project suggests novel ways to bridge the party politics literature on the far right with research on social movements. At the core of FARPE’s conceptual framework lies the idea that recent European crises have changed far-right street politics quantitatively, by increasing the magnitude and size of protest in most EU countries, but also qualitatively by diversifying the type of groups and people involved in these.

Since the rise of the Nazis in Weimar Germany conventional wisdom holds that economic hardship fosters far-right mobilization. Although there is no elaborate academic theory supporting this statement, the “economic-crisis-breeds-extremism” thesis remains popular among academics and commentators. FARPE assesses the political consequences of the Great Recession on far-right mobilization after the breakdown of Lehman Brothers in Autumn 2008. It provides systematic knowledge about the a) nature, b) evolution and c) characteristics of far-right protest in times of economic and social distress. The research will notably rely on Protest Event Analysis using national quality newspaper and party websites to ascertain whether, when, and how the far right engages in contentious politics in selected European countries (Austria, Bulgaria, Estonia, Hungary, Germany, Greece, Italy, Poland, Slovakia, Sweden and the UK).

This project is funded by the Centre for Research on Extremism