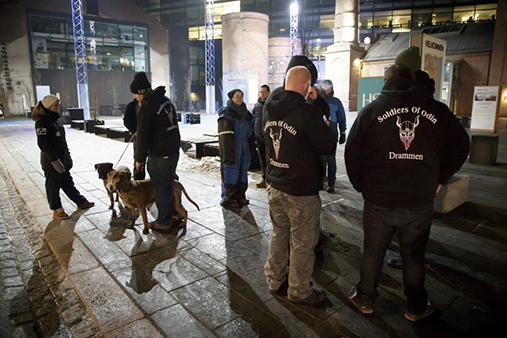 Met with criticism: The Soldiers of Odin, who patrolled many Norwegian cities in February, met with immense criticism. (Photo: Heiko Junge/ NTB)

The telephone in the office of Tore Bjørgo, professor and director of the centre, rings incessantly. Norwegian and foreign journalists want his comments on everything from the Soldiers of Odin, to the rise of right-wing extremism following the terror attacks in Europe, to the prison conditions of the terrorist responsible for the attacks in Norway on 22 July 2011. Since the announcement at the end of last year that the University of Oslo would be the host institution for the “Center for Research on Extremism: The Extreme Right, Hate Crime and Political Violence (C-REX)”, which is its full name, Tore Bjørgo and deputy director and researcher Anders Ravik Jupskås have been kept extremely busy.

The centre became operational on 1 February, and the two had enrolled around twenty researchers from the various academic communities behind the application. Four thematic groups have begun their research into the following focus areas:  ideology, activism and organization; friends and foes of extreme right actors; hate crime, hate speech and violence; and prevention and intervention.

Clipped the wings of the Soldiers of Odin

Tore Bjørgo has also managed to conduct a small amount of fieldwork among the Soldiers of Odin as they patrolled the city streets of Norway in February.

“The Soldiers of Odin have received a disproportionate amount of attention relative to their size,” says Anders Ravik Jupskås. Tore Bjørgo emphasizes that the critical attention that was rapidly focused on the group helped to stop much of their activity in its tracks.

“The cross-party political opposition that arose gave the police a clear signal that the Soldiers of Odin were not wanted. Five or ten heavily built guys in black hoodies, with a couple of dogs on leads, are not exactly a reassuring presence on the streets,” says Bjørgo.  He believes that several of the “soldiers”, despite their criminal records, were probably well-intentioned in terms of making the streets safe, even though it had the opposite effect. He also underlines that right-wing extremists have undoubtedly used the group to mobilize opposition to refugees.

“They created a myth that the influx of refugees leads to a lack of safety on the streets. In reality, crime rates in Norway are falling, and have done so for quite some time. This applies to most forms of criminality, not least youth crime and gang-related crime. The reason that so many people believe that crime is increasing is because the media devote so much space to anything that relates to threats,” says Bjørgo.

The researchers associated with C-REX will devote considerable attention to the media and especially the internet.

“Just think of all the websites featuring conspiracy theories that explain to you “the world as it really is.” There’s a lot of research to be done on that,” says Jupskås.

Mandate from the government

Since the opening of the research centre, many have wondered why it will focus on right-wing extremism rather than extremism in its broad sense.

“The answer is that it was the present government, a coalition of the Conservative Party and the Progress Party, which took the initiative to establish a research centre on right-wing extremism. Scientists at the Norwegian Defence Research Establishment (FFI) had unsuccessfully attempted to obtain funding for research into right-wing extremism, and pointed out that it was paradoxical that there was no funding available for this type of research in the wake of the terror attacks on 22 July 2011,” says Bjørgo.

So the government answered the call and decided to establish a separate research centre on right-wing extremism.

However, FFI will work as a partner with C-REX:

“FFI has become a global leader in research on Islamic extremism because they have concentrated on this since 1999. We will become experts in right-wing extremism by focusing just on that,” says Bjørgo.

However, C-REX will also conduct research on the similarities between different extremists – both Islamists and right-wing extremists. Using comparative research, Tore Bjørgo found it useful to divide militant extremists into four different types that are driven by entirely different motives: 1. Ideological conviction, 2. Need for affiliation, 3. Thirst for adventure, need for “action”, 4. Social frustration, aggression, hatred and violence. These types are recurrent among right-wing extremists, jihadists and other violent extremists.

“These are ideal types, and the number that fit the different categories will vary from group to group. Individuals may display features from several categories,” he emphasizes.

“And not least, different types of entry into extremism will require different preventive measures,” says Jupskås, who underlines that the Center for Research on Extremism will encompass both practical research and basic research on the underlying causes of extremism.

In order to make the theoretical research as available as possible, C-REX has established a separate forum for good exchange of knowledge with schools, the police, municipalities, civil society and policy-makers.

“Our most important task is to help reduce violence in society, and contribute to strengthening democratic preparedness,” says Jupskås.

A great deal of hate crime

Tore Bjørgo and Anders Ravik Jupskås, who have conducted research on right-wing extremism for years, both know that the phenomenon has always existed. In recent years, however, right-wing extremists have been overshadowed by militant Islamists.

The terror attacks of 22 July 2011 of course attracted widespread attention, as did the massacre at a school in Trollhättan, Sweden. But despite the fact that right-wing extremist violence has always been present to varying degrees in Europe and Scandinavia, according to Bjørgo it has not featured prominently in the media.

“In Russia there have been more than 600 racially motivated murders over a ten-year period.”

“In the countries of the former Eastern Bloc we also see a great deal of hate crime directed at the Roma population, without it making the headlines,” says Bjørgo.

He tells us that murders by right-wing extremists occur far more often than jihadist-motivated murders in many European countries.

“These murders generally happen on a smaller scale. People are beaten to death one by one, to put it rather bluntly.”

“It fails to capture media attention. It is simply not oriented towards the media,” he emphasizes. “And once in a while a massacre occurs, as on 22 July 2011.”

Hardening of the public debate

According to Bjørgo and Jupskås, the fact that the media in Norway and elsewhere in Europe have now turned the spotlight on right-wing extremism has an obvious connection with the influx of refugees to Europe in the past year. Few people had predicted that we would see right-wing extremists marching through the streets in many European countries to mobilize opposition to the refugees.

Refugee asylum centres have been set on fire. And cyberhate directed at refugees and immigrants is increasing.

“We have systematically reviewed the statements made by anti-immigrant groups on social media in Norway online, and we see that the number of comments is increasing. And there is a growing number of adherents. There has quite clearly been a hardening of the public debate,” says Jupskås.

The Center for Research on Extremism has initiated several parallel research projects which address, for example, economic recessions and right-wing extremism, extremist Christian movements with an anti-Islamic message, youth organizations in radical right-wing parties, and how right-wing extremism can be prevented. C-REX does not devote any particular attention to the 22 July terrorist. Both Bjørgo and Jupskås have already published books and articles about this.

“The enormity of the act does not make the terrorist more interesting,” Jupskås emphasizes.

He tells us, however, that the centre will conduct research on solo terrorists and what motivates them in comparison with terrorists who are part of a network.

The official opening of the Center for Research on Extremism is on 20 April. (in norwegian only)