What role does gender play in the far right? 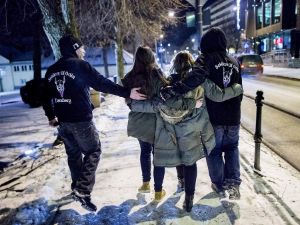 Integral to the far right

Gender refers to the roles, behaviors, activities, attributes, and opportunities that culture, ideology and society considers appropriate for girls and boys, women and men. Gender dimensions are integral to the far right in terms of ideologies, identities, values, norms, and behaviors. Both men and women are supporters and members of far right parties, organizations, and movements, and gender norms shape the roles they play in politics. Knowledge about the intersection of gender and far right politics come from studies such as women in the Ku Klux Klan in the US,[1] racism, sexism, and antisemitism as masculine reassertions in Western countries,[2] and gender and fascism in Europe.[3]

Scholars have noted that discourses and practices pertaining to gender are integral to far right nationalist ideology.[4] Notions of “masculinity” or “femininity” are deployed as symbolic capital, ideological resource, and as a rhetorical device to problematize the identities of those against whom they believe themselves fighting.[5] Marking differentiated others as ethnic, religious, or gendered threats to imagined sameness can legitimize and validate prejudice, and hence produce images of the “good and innocent nation”, righteous and tolerant.[6] During the so-called refugee crisis of 2015, a range of far rights actors propagated images of “hypermasculine” dark-skinned migrants, violently imagined as “rapefugees” that threatened the purity of “our women”, as well as of feminine nationhood. Such racialized and gendered imaginaries of the perceived menace of Middle Eastern enemies can be used to mark white masculinity and morals more desirable.[7]

Ideas about masculinity and femininity—to protect women (and children)—fuels particular forms of male empowerment, but also particular forms of gendered violence. Anti-immigrant groups characterized by Islamophobia or at least opposition towards Islam, such as the English Defence League (EDL) and Stop Islamization of Norway, as well as parties like the Norwegian Progress Party and the now defunct Pim Fortuyn List in the Netherlands,[8] have mobilized on a rhetoric of progressive gender values.[9] Although organizations like the EDL rarely discuss gender equality in its own right, their anti-Islam agenda is strongly based on conceptions of Islam as inherently unequal and oppressive to women.[10] In order to situate themselves as different from the perceived imminent Islamic threat linked to immigration, the far right espouses Western liberal “values”, including gender equality and (white) women’s emancipation.[11] Some far right political parties, such as the French National Rally and For Britain, as well as figures such as Norwegian activist Hege Storhaug, prior Dutch politician Pim Fortuyn, and American alt-right celebrity Milo Yiannopoulos, also position themselves as LGBTQ-friendly or identifying. Mobilization along progressive gender policies, therefore, serves an anti-immigration and anti-Islam purpose,[12] and is often described as femonationalism or homonationalism. Despite these developments, traditional gender roles largely dominate dynamics among far right movements and actors.

Mobilizing against gender equality is more common. Gender equality and pro-gender norms, which include increased acceptance as well as legal rights for LGBTQ communities, are framed as part of a globalized and liberal multicultural agenda, often described as “gender ideology” by far right groups, movements and ideologues. Within the extreme right, it is viewed as a “race war”, in which Western civilization is seen as under threat from declining birth rates. Traditional gender values and roles for men and women are foundational of this resistance, where the ideals of “Kinder, Küche, Kirche” (children, kitchen, church) finds support across various far right groups. By taking the stance that femininity is a result of biology, far right ideology holds that women should assume traditional gender roles such as childbearing, maternal caregiving duties, and domestic labor. Women are considered to be vulnerable and in need of a protective family unit headed by a man with “natural” leadership abilities. This also holds true for women-only far right organizations in countries such as India, where motherhood is viewed as fulfilling a sense of patriotic duty. At the same time, these women are engaged in paramilitary drills and combat training exercises in order to strengthen themselves to defend against Muslim men seeking so-called “love jihad” (i.e., the seduction of Hindu women in order to convert them to Islam).[13]

Gender has proven to be a strong and constant predictor of far right support[14] in the sense that members and supporters (including voters) of far right organizations are overwhelmingly male. However, this gendered aspect of the far right remains largely remains unquestioned, and hence obscures the connection between masculinity and the far right.[15] In response to this gap, scholars have more recently emphasized the importance of masculinity as one of the key drivers of young men’s involvement in far right organizations.[16] In particular, (young) men’s attraction to far right environments needs to be situated in a broader context of declining (white) male privilege.[17] These experiences of loss of privilege are distinctly gendered, in the sense that they may evoke a sense of emasculation and loss of manhood among young men.

The sociologist Michael Kimmel[18] argues that young men’s attraction to violent far right extremism is at least in part driven by a need to reclaim manhood and restore a sense of masculine entitlement. ‘Aggrieved entitlement’—a gendered sense of entitlement—makes men feel thwarted by political and economic change, making them feel frustrated and emasculated. Membership of a violent far right extremist group helps to restore their sense of manhood through comradery, male bonding, and violence. Research shows a clear connection between white masculinity and violence in the US context, where the combined effect of the rise of “identity politics” and the loss of while male privilege provides a cultural impetus for social (largely gun-based) violence, where the perpetrators are predominantly young white men.[19]

Regardless of the prevalence of men in far right movements, women still have critical roles as supporters, activists, and sometimes even leaders, as well as symbols and rhetorical figures in political propaganda, as was documented in earlier studies.[20] The far right assumes that femininity equates with women, and masculinity equates with men, and as such, reproduces these concepts in designating women and men different tasks within organizations. Although women are often portrayed as followers of male leaders, or as innocent homemakers, recent studies have documented women’s roles as active proponents of ideology and practices in far right politics.[21] Such involvement has been observed in far right organizations across national contexts, including Europe,[22] the US,[23] and India.[24] Some far right political parties and groups have women serving in leadership positions, as is the case with National Rally under Marine Le Pen in France, Alternative for Germany under Alice Weidel, and Pauline Hanson of the Australian One Nation party.

This is not to exclude the fact that women in far right politics often advocate for traditional gender norms. These norms are viewed as under threat due to liberal feminism, multiculturalism, and immigration. Further, these threats are seen as deteriorating to society and thus the far right advocates for a nostalgic, mythic past in which women and men are destined to fulfil biological roles.

[7] Thorleifsson, Cathrine (2019). In pursuit of purity: Populist nationalism and the racialization of difference. Identities: Global Studies in Culture and Power.