The ‘Rape Game’: Framing the Cologne and Stockholm Events

Framing is an integral part of breaking a news story. Some of the frames of the Cologne and Stockholm events that stuck, are only loosely based on a ‘true story’. Others are pure fabrications. 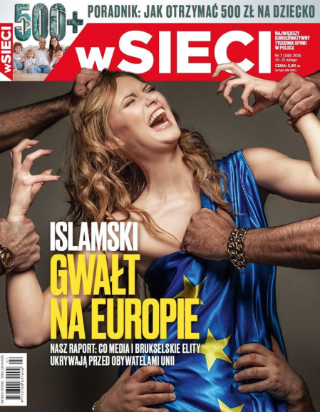 How an event is framed is critical to how it is perceived and understood and whether it sticks. According to Robert Entman 'the power of framing and the way it operates is by selecting and highlighting some features of reality while omitting others’. The trick is to create an angle that will catch fire and circulate like fire in dry grass. Arguably, some frames do not factor in ‘reality’ all that much – but they do catch fire.

In the case of the attacks in Cologne, the first witness reports were from women who reported that they had been sexually assaulted by a mob of asylum seekers. The second allegation was that the German police were instructed to keep their mouths shut about the attacks. They were allegedly instructed by higher ups in both police and politics, because this type of incident might change public opinion about refugees and rip apart Merkell’s frail open door policy. The hush-hush allegations towards the police in Cologne gained clout when similar accusations were made against Stockholm police after the story of attacks against women at a Stockholm music festival, carrying similar traits broke.

The Stockholm festival story related to repeated attacks (for several consecutive years) on women’s bodies. The dominant frames also pointed to asylum seekers, more specifically to young Afghani men who enter the country as unaccompanied minors. Here too, the police faced allegations of having covered up the story to deter stirring up even more negative feelings towards refugees and Muslims in an already tense political climate.

Public outcry, anti-Islam, and anti-immigration sentiments easily fuelled as a result of cover-up allegations. Reference to a home-grown Arab, Muslim 'rape-game’ only served to make the story stick. The danger of the hush-hush trope is that any attempts at correlating facts about how many people were involved or who they were is brushed away as yet another attempt at covering up the story.

For instance, a rather under-reported aspect is that most of the filed allegations of assault in Cologne concerned theft and not sexual assault. In the midst of the anti-Muslim, anti-refugee, anti-Arab call for the protection of European women, some have called out some discrepancies and double standards with regards to Cologne-born ‘feminists’ who argue for the protection of European women, as was wryly pinpointed by the commentator and poet Musa Okanga in his tweet:  'Shout-out to the men who were posting rape jokes just days and weeks ago but now #Cologne has happened they've gone full suffragette'  While others have provided a similar analysis, this does not appear to be the frame that sticks.

A German chief of police is reported to have said that Arabs are bringing their customs of  'taharush gamae' to Europe - as an explanation for the attacks in Cologne. This term 'taharush gamae' has circulated intensely ever since, at times gaining new renditions such as ‘taharrush game”.

Here is a quick Arabic lesson (from someone who actually speaks Arabic). 'Taharrush' means “harassment", but at least in Egypt it is often used as short-hand for “sexual harassment” (taharrush gensy). 'Gamae' (in its variant transcriptions into the Latin alphabet) means 'collective', hence 'taharrush gamae' means 'collective harassment' or 'group harassment' - and 'sexual harassment' is implied. Among gender activists, there is a push for using more accurate Arabic terminology when describing incidents, which are of a more violent nature, so as not to confuse sexual assault or rape with other forms of harassment. (Gender scholars and activists are pushing for the same precision in the English language).

In relation to the framing of the Cologne attacks, many have made a case for using the Arabic terminology 'taharrush gamae', arguing that the phenomenon is uniquely Arab since they even have a word for it. However, if we were to employ this type of logic one could state that 'gang rape' was an exclusively British or American phenomenon due to having suitable English terminology.

'Taharrush game' on the other hand appears to be a linguistic misunderstanding or an automated spell-check error exchanging the Arabic word  'gamae' with the English word 'game'. I have certainly never heard of it before.  Regardless, the term 'Taharrush game' has been translated into'“rape game', and has been characterized as a pastime for Muslim and Arab men. This has in turn led to fuelling the flames of fury and more spin off stories.

Undeterred by blurry details of who and how many participated in the Cologne and Stockholm events, numerous commentators consider the events proof of how Muslim men are taught to demean and sexually assault women, and will bring these practices to Europe.

Framing ’the rape game’ as an indigenously Muslim or Arab pastime, is a spinoff story which is a powerful tool to fuel both fear and outrage.The conclusion is thus that Muslim, Arab men and asylum seekers must be kept out of Europe in order to protect European women from being raped. This has given rise to questionable ad hoc groups such as masked men in Sweden and Odin’s Soldiers in Norway who claim that their purpose is to parade the streets and uphold the safety of its rightful (white, non-Muslim) citizens. Further complicating matters, Allah’s Soldiers was created in response to Odin’s Soldiers in Norway, which many commentators find equally problematic.

While sensationalist frames do not go uncontested, many attempts at nuancing the picture and arguing that Muslim, Arab men are not a priori rapists or sexual offenders any more than white Christian men are, are often met with accusations of supporting attacks on European women’s bodies or may potentially spark a tirade of sexually violent commentary against the author attempting to bring nuances to the debate. When feminists state or launch campaigns that convey that they do not wish to be used as pawns in a racist worldview, they similarly run the risk of having sexually violent threats thrown their way, either directly or in the form of general commentary.

Recently the front page of the Polish right wing magazine, wSieci (The Network), featured the main heading: 'Islamic Rape Of Europe', coupled with the full-blown cover-page dramatic image of a blonde white woman, draped in the European Union flag, screaming as she is being attacked by dark skinned, hairy, male arms.  Suffice it to say that the visual message is not exactly subtle.

Counter Frames in the Shadows

Murky facts do not deter the frames of absolute certainty. More grave, is that the variety of countering reports do not appear to be as widely circulated in the media. For instance, there is still much confusion about all the essential numbers.

The reported numbers for the same incidents have been in the thousands, hundreds and tens. The fact that the numbers are all over the place - and that this itself - has not problematized more in media reports, is unsettling.

Similarly, the allegations of ‘cover ups’ are not clear-cut. In the case of the Stockholm festival for instance, both police sources and festival employees maintain that they have taken systematic measures to counter sexual assaults at this festival for several years and that it was not kept secret from any of the employees, participants or performing artists. Apparently, some of the artists had even addressed this issue from the stage.  Another example, is that there are numerous reports from Stockholm festival participants, festival organisers and volunteers, and police that counter the claims that the sexual assaults were conducted exclusively by a group of young Afghani asylum seekers. Such eye-witness reports clearly state that the men involved groping and assaulting women were of all ages, skin colours and ethnicities.

These accounts while reported in the margins of mainstream media, do not appear to gain the same coverage as the more sensationalistic frame that typecasts Muslim Arab men as a priori sexual offenders. On a similar note, the story of an American woman who was rescued out of the mob in Cologne by a group of Syrian refugee men, who both got her to safety and ensured that she got reunited with her husband whom she had been separated from in the midst of the chaos. Syrian refugee men as 'the saviours’ in Cologne may be less powerful imagery than Muslim refugee men as villains and sexual offenders. If nothing else, it seems evident that with so many contrary eyewitness reports and diverging 'facts', the allegations of a cover-up may be less clear-cut than first assumed.

The Cologne and Stockholm incidents and the subsequent debates have also given rise to fabricated stories, far beyond the claim that 'taharrush game’ is a home-grown Muslim, Arab form of violent entertainment.

For instance, a Russian-German teenage girl fabricated a story about being raped by asylum seekers in Cologne. The fabrication was discovered during police investigations, during which the girl broke down and admitted that she made the story up. The girl was referred to psychological health care. Intriguingly, the Russian foreign minister had previously fed the media the story that no one was looking into the girl’s story due to a police cover-up.

Fabricating stories of this type or ‘atrocity propaganda’ is not uncommon, fabricated rapes stories were told during the Iraq war, for instance.  On a similar note, a video was recently circulated on social media and claimed to feature a recent incident in Norway in which a Swedish woman was being attacked by male asylum seekers in Norway, only to be discovered that the footage was from 2011, and filmed in the Netherlands. At the other side of the ideological spectrum, a German refugee volunteer recently made headlines when it was discovered that the story she had previously recounted in the media of a Syrian asylum seeker dying in line, while waiting for assistance was in fact entirely fictional.

This all brings contesting Cologne and Stockholm frames to a new level, revealing not only how incredibly polarised the debates are, but also that people are willing to go to great lengths to argue their case. Indeed, it seems that a number of agenda setters believe so strongly in their cause that they are willing to falsify and fabricate a story in order to both go viral – and prove that their framing of the story is 'the truth'.