The Norwegian oil experience has many aspects: Becoming a large oil producer and at the same time maintaining en egalitarian welfare state, the establishment of a large oil fund, the development of a strict regulation regime and more. 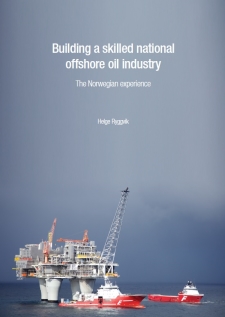 This report, written by Helge Ryggvik from the Centre for Technology, Innovation and Culture, concentrates on a question that in many oil producing countries today has been raised under the label local content. How could Norway, in an industry dominated by strong, well-established oil companies and specialised supply firms, develop a local industry that was able to master the advanced technological challenges involved in producing oil, and in such a difficult offshore environment? Also, in recent years, oil services have become a significant export product for Norway, second only to oil and gas.

The historical circumstances were specific to Norway. However, as a major oil producer in what was for some decades the main laboratory for new offshore technology, there are lessons of universal value.

The report is published by The Confederation of Norwegian Enterprise (NHO). In 2014 the book was translated to portuguese.