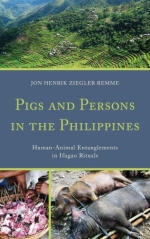 By a detailed ethnographic description of Ifugao cultural practices related to kinship, animism, prestige, and death, Pigs Make Persons shows how pigs are involved in the constitution and re-constitution of relations between humans and between humans and spirits.
Remme draws upon theories of relationality, performativity, and assemblages to argue that the exchange and consumption of pig meat have the ontological effect of enacting persons. He also shows how pigs are the prime means of engaging in relations with spirits and argues further that prestige can be understood as a heterogeneous assemblage of relations of which pigs play a central role. While pigs are thus constitutively involved in the enactment of persons, Remme also shows how they are operative in the re-constitution of relations that occurs at death.
In documenting these practices, Remme argues for a relational understanding of personhood that goes beyond inter-human relations and includes relations with nonhuman beings, including spirits, and animals.