The nature of the land: the Dukuduku forest and the Mfolozi flats, KwaZuluNatal

Land continues to be a contentious issue in much of sub-Saharan Africa. Recently, a new form of conflict over land has received much attention. Knut G. Nustad and Frode Sundnes claim that in the case they study, the nature of the land itself is at stake. The wetland area, which served as hunting grounds in the past, was transformed into productive fields. This struggle over the nature of the land lies at the heart of the controversy surrounding the land claim.

Link to this article: 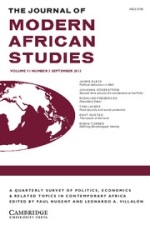