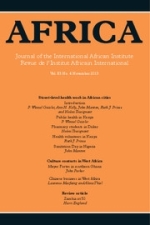 P. Wenzel Geissler is also one of the co-editors of Ethnographies of the Road, this special issue of Africa, the Journal of the International African Institute, along With Ann H. Kelly, John Manton, Ruth J. Prince and Noémi Tousignant.

Since the Second World War, the Kenyan city of Kisumu has been an important site of medical research and public health interventions – on malaria and other vector-borne diseases, and lately on HIV and related infections. This article compares the work and lives of two generations of local workers in public health research, each central to science in the city at their time: staff of the Ministry of Health's Division of Vector Borne Disease (DVBD) in the decades after independence, and temporary employees of the Kenyan Medical Research Institute (KEMRI) in its collaboration with the US government's Centers for Disease Control and Prevention (CDC) in the early twenty-first century. Against the backdrop of changes to the city, which stagnated during the 1970s and 1980s, became an epicentre of the East African AIDS epidemic, and underwent an economic boom of sorts from the late 1990s – at least partly driven by HIV research and intervention programmes – the article examines the spaces and movements of health research workers, and their experience of the city in time. The now elderly DVBD workers' accounts are pervaded by memories of anticipated progress and the convergence of life and work in the civic wholes of nation and city; by chagrin about decay; and by nostalgia for lost hopes. Today's young KEMRI/CDC workers' short-term contracts, and the fragmented city they inhabit and study, make for less bounded and predictable spaces and temporalities. Their urban lives and work take shape between remainders and remembrances of past projects, the exhaustion of everyday struggles to make a living and a meaningful life, and the search for new forms of urban order and civic purpose.