On Xenophobia and Nativism 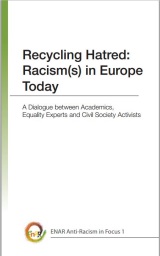 If there is anything that social anthropological literature on ethnicity and ethnic relations can tell us, it is that such boundary-makings, expressed in ‘nativist’ and ‘xenophobic’ attitudes, are not innate, but are constructed in and through social and political processes (Barth, 1969). They are often constructed by social and political elites seeking to gain capital and clout.

The article can be read from page 87 in "Recycling Hatred:Racism(s) in Europe Today"