Failing to Protect Minorities Against Racist and/or Discriminatory Speech? - The Case of Norway and § 135(a) of The Norwegian General Penal Code

Sindre Bangstad explores the recent application of the "racism paragraph" by higher Norwegian courts. Additionally, he provides a defence of the legislation forbidding grossly discriminatory or hateful public expression against the criticism of "freedom of speech" absolutists. 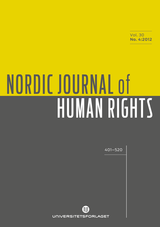 In Norway, at a recent conference organised by the Fritt Ord Foundation in partnership with the New York Review of Books entitled ‘Challenges to Multiculturalism: A Conference on Migration, Citizenship and Free Speech’, the prominent US legal philosopher Ronald Dworkin argued that the so-called “racism paragraph” of the Norwegian General Penal Code (§ 135(a)),2 introduced in 1970 and last amended in 2005 was “unconstitutional” in light of the guarantees of freedom of expression in the new § 100 of the Norwegian Constitution (introduced in 2004).

Sindre Bangstad demonstrates why Professor Dworkin’s claims about the relationship between § 135(a) and § 100 of the Norwegian Constitution can be classed as both factually incorrect and grossly exaggerated. Bangstad also (with reference to the recent work of Professor Jeremy Waldron amongst others) demonstrates that, far from being a threat against core liberal values and democratic legitimacy, Norwegian legislation against racist and discriminatory expressions —in theory and also practice — seek to protect individual rights to dignity and formal rights to equal citizenship, which are core liberal values.