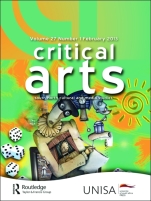 Since the early 1990s, a number of writers and initiatives have tried to gauge and critically assess the potentials of contemporary (visual) art–anthropology collaborations. ‘Dialogue’, has been a much-discussed term in anthropology’s hermeneutic tradition, and despite different emphases it is clear that it can never just mean a level positioning of partners, collaborators or actors, but has to account for difference. It is in this sense, then, that Arnd Schneider uses an expanded notion of ‘uneven hermeneutics’ or an ‘uneven hermeneutic field’ throughout the article when exploring the critical implications and the potential of dialogical art–anthropology collaborations which employ the seemingly ‘open’ ethnographic fieldwork situation as their locale.