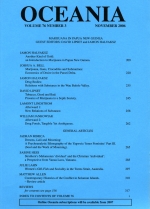 Much has been said about mana since Robert Henry Codrington’s 1891 exegesis based mainly onethnography from the Banks Islands in northern Vanuatu. In Polynesian contexts, mana has been regarded as a cultural common denominator, with comparatively minor differences within the vast Polynesian cultural area. In Melanesian scholarship, however, consistent with the general emphasis on cultural diversity within the region, it remains a matter of considerable debate whether there is much to gain from approaching mana with generalising ambitions. In his seminal contributions to the discussion, Roger Keesing insists that Codrington mistook mana for a noun and consequently derailed scholarship on Melanesian mana. But Codrington’s work is mainly based in the language of the island of Mota, where Codrington spent several years during his almost three-decade long tenure as a pioneer linguist and missionary with the Anglican Melanesian Mission. And in the Mota language, mana is nominalised. In this article, I argue that this is attributable to regular visits from the Polynesian outlier Tikopia in pre-Christian times, intensified by the proclivity of the Maori-speaking first leaders of the Melanesian Mission to identify concepts that were phonemically familiar in their search for adequate translations of theological notions related to spiritual agency. When the language of Mota was chosen as the lingua franca of the Melanesian Mission in the 1860s, the Banks Islands’ version of mana, soon explicitly associated with the powers of the Christian God, was disseminated through large parts of the south and central Solomon Islands and northern Vanuatu – including Tikopia. This has provided the islands exposed to Anglicanism with relatively new notions of agency and efficacy and created some common cultural denominators.