'She's My Sister-In-Law, My Visitor, My Friend' - Challenges of Staff Identity in Home Follow-Up in an HIV Trial in Western Kenya

Recent ethnographies of clinical research in Africa have described the impotance of "relatedness" to the successful conduct of trials. They have also revealed the tensions between such relatedness and the scentific and ethical rules of clinical trial work, and at the risks of mixing professional and private, erasing the "ordered separartions upon which formal ethics and scientific evidence rest". Among other colleagues, Ruth Prince and Paul Wenzel Geissler participate in this overviewarticle of HIV science in western Kenya. 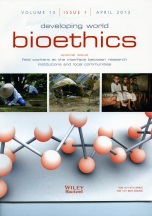