‘“Property” and “rights” in a South African land claim case

This chapter contributed by Knut Gunnar Nustad discusses notions of 'property' and 'rights' in the context of South Africa's land reform programme. Both concepts carry with them a heavy ideological baggage. This is evident in the policies on land reform, which have sought to reach a compromise between different and often contradictory histories of both rights and property. 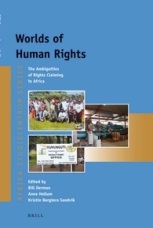 A shift in government policy, from treating land reform as a question of rights to a question of the transfer of land, has been accompanied by reification of the idea of what constitutes a ‘community’. The result is a policy that is seriously out of touch with the complex historicities of dispossession which the land reform was meant to address. As shown by the case discussed in the chapter, these problems become exacerbated when the area in question is part of a conservation area.