Spiritual War: Revival, Child Prophesies, and a Battle Over Sorcery in Vanuatu

Christianity has a long history of representing the morally good for the Ahamb people on the Island Vanuatu. Tom Bratrud refers to how Ahamb people understand their fellow human by using Christian moral  standards. 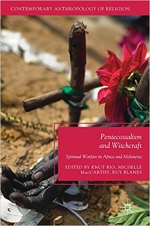 Sorcery and Christianity have been in an intimate and seemingly opposing relationship on the small Ahamb Island in Vanuatu for more than a century. While sorcery is seen as the most potent threat to the good life as it brings suffering and death, Christianity appears as the main tool to address this and other problems of cosmological and social character.

During a turbulent time on the island in 2014, a Christian charismatic revival, largely led by children, became the subject of hope for change on Ahamb. A main event within the revival was a dramatic spiritual war that confronted the island community with the plain and unvarnished realities of good and evil, of God and sorcery, while revealing secrets that literally became a question of life and death.