SYRIAN REFUGEES AND EVERYDAY HUMANITARIANISM IN THE ARCTIC

In her essay Nefissa Naguib shows the humanitarian encounter and  how volunteer movement founded in response to the refugee crisis, despite Norwegian government policies. 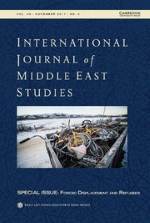 In late 2015, approximately 2,000 Syrian asylum seekers made their way into Norway via the Arctic passage from Russia. What ensued are “global moments,” breakthrough events that have reshaped lives and futures for both the refugees and those who aided them, and it is the latter group on which this article focuses. As refugees began arriving in Arctic Norway, Refugees Welcome to the Arctic, an ad hoc grassroots organization, was formed to assist them. This group of ordinary people, most of them with no previous humanitarian experience, took action in defiance of Norwegian government policies, and providing food became the focus of their efforts. Refugees Welcome to the Arctic members often described being motived to act by their own traumatic memories of the region's experience of World War II, a time of deprivation and brutality suffered at the hands of the retreating German army. Food, as an enactment of compassion, is shown to be a powerful means through which people connect in very personal, concrete ways to the humanitarian enterprise.