The Mauritian Paradox: Fifty years of Development. Diversity and Democracy

Thomas Hylland Eriksen and Ramola Ramtohul are editing topics ranging from political leadership, language, religion and interactions to the materiality of multiculturalism from when Mauritius proclaimed independence in 1968, up to our time.

A preview of the book is available here. 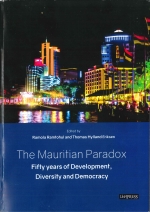 Speaking of Mauritius as an economic miracle has become a cliché, and with good reason: Its development since Independence in 1968 can easily be narrated as a rags-to-riches story. In addition, it is a stable democracy capable of containing the conflict potential inherent in its complex ethnic and religious demography.

This book brings together some of the finest scholarship, domestic as well as foreign, on contemporary Mauritius, offering perspectives from constitutional law, cultural studies, sociology, archaeology, economics, social anthropology and more. While celebrating the indisputable, and impressive, achievements of the Mauritian nation on its fiftieth birthday, this book is far from toothless. Looking back inevitably implies looking ahead, and in order to do so, critical self-scrutiny is essential, to be able to learn from the mistakes of the past.

The contributors raise fundamental questions concerning a broad range of issues, from the dilemmas of multiculturalism to the marginal role of women in public life, from the question of constitutional reform and the continued problem of corruption to the slow destruction of Mauritius’ joy and pride, namely the beauty and purity of its natural scenery. Taking stock of the first fifty years, this book also looks ahead to the next fifty years, giving some cues as to where Mauritius can and should aim in the next decades.

Since he first did fieldwork in Mauritius on ethnic dynamics and their relationship to national identity in 1986, Thomas Hylland Eriksen has followed the economic, cultural and political situation in the island. Ramola Ramtohul, a sociologist working at the University of Mauritius, is a prolific researcher on education, feminism and women's activism in the island, and is currently researching, among other projects, the implications of foreign investments in real estate.