Base Encounters: The US Armed Forces in South Korea

Elisabeth Schober's new book, Base Encounters, explores the social friction that US bases have caused in South Korea, where the entertainment districts next to American military installations have come under much scrutiny. 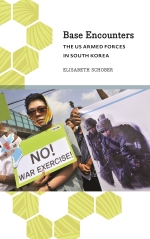 The Korean peninsula is one of the most heavily militarised regions in the world and the conflict between the North and South is continually exacerbated by the presence of nearly 30,000 US soldiers in the area. Crimes committed in GI entertainment areas have been amplified by an outraged public as both a symbol for, and a symptom of, the uneven relationship between the United States and the small East Asian nation.

Elisabeth Schober's ethnographic history scrutinises these controversial zones in and near Seoul. Sharing the lives of soldiers, female entertainers and anti-base activists, she gives a comprehensive introduction to the social, economic and political factors that have contributed to the tensions over US bases in South Korea.