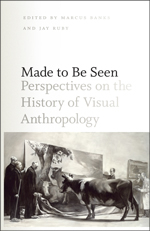 Abstract of Chapter 4: Rather than providing a survey history of the anthropology of art, this chapter will chart the relationship between the disciplines of art (visual arts in the widest sense), art criticism and art history, and anthropology, with a particular emphasis on these disciplines' practices of appropriation of other cultures, as well as their relationship with each other. Paradigmatic figures whose work has crossed boundaries and gone beyond accepted frames will be explored. Examples include Aby Warburg 's interpretation of snake rituals observed among Native Americans in the southwestern United States, Alfred Court Haddon's early film recordings, Robert and Margaret Park Redfield's collaboration with the journal Mexican Folkways and the photographer Tina Modotti, Michel Leiris's participation in the surrealist movement, Julius Lips's early work on representation of the West in non-Western art, and Maya Deren's ethnographic and film work in Haiti, as well as classic innovators of the subject in anthropology, such as Franz Boas and, more recently, Alfred Cell.