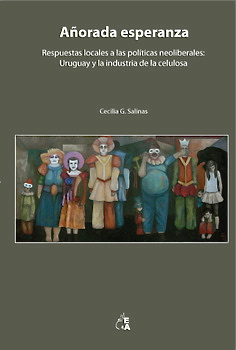 Drawing on five months of fieldwork in a rural community in the west cost of Uruguay and the subsequent analysis of the data, this thesis argues for the importance of studying neo-liberal capitalism in relation to local social and economic dynamics. Neo-liberalism indeed has effects but these effects are not mechanically reproduced everywhere. This study addresses the socioeconomic effects of the installation of a Finnish pulp mill in a Uruguayan rural locality.

Neo-liberalism became dominant in the eighties and nineties in Latin America leading to reforms in the industrial policies, which promoted foreign investment and exports as the driving force for growth and as a solution for the regions economic problems. Thus, the forestry and pulp industry acquired a central role for the economic growth in countries such as Uruguay. In the eighties Uruguayan governments started to stimulate the monoculture of tree plantations with exonerations, flexible credits, and direct subsidies from the State.

In this way the Uruguayan governments have managed to attract the interest of multinational firms, such as the Finnish company Botnia to install a pulp mill mega-project in the country. Botnia became the largest foreign investment ever in Uruguay. Governments and financial institutions have referred to the investment as progreso for the host community. However, I argue as many others have done before that global agro-export enclaves, such as the Finnish pulp mill, only benefit a small segment of the local community.

Empirical examples are presented to illustrate the fact that this rural community has not had major benefits of the exploitation of their natural resources. I attempt to offer a localised understanding of global processes arguing that it is wrong to attribute poverty to local autonomous production processes. However, there are also limitations in explaining local socioeconomic processes in terms of neo-liberal capitalism alone. I construct my argument around three different foci, but which all are closely linked together.

First, the study examines the youts living conditions and the local carnival. Second, the study analyses the role of the past in relation to the way the local people conceptualised the Finnish pulp mill.Lastly, the study compares two different models of social development at different periods of time in Fray Bentos.