Running a Tight Ship (yard)? The “Global Base” of a South Korean company in Subic Bay (Philippines) 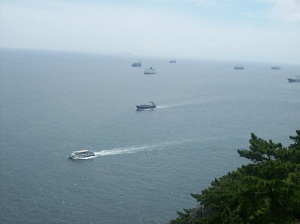 This project will explore the tightly interlinked cultural, economic and environmental consequences set in motion by the offshoring strategy of one East Asian ship-building company. By investigating both the loss of jobs at a South Korean shipyard and the simultaneous rapid expansion of a second manufacturing site at Subic Bay (Phi), I will look into the translocal processes that have led to the involvement of a major South Korean conglomerate in a Special Economic Zone on Philippine territory. In this study of a case of exceptionally pronounced fragmentation of state territoriality, I will explore in great detail the realities a clash of foreign capital with a particular local community has given rise to.

Furthermore, during briefer periods of ethnographic field research in South Korea, I shall also explore conditions nearby the original manufacturing site in Busan, which will allow me to gain insights into the labor struggle that has recently occurred in the community in reaction to the slow dismantlement of this site. I also want to look into the efforts that have been made amongst South Korean and Philippine labor activists to connect the ordeal of South Korean workers being laid off in Busan with that of shipyard laborers at the company’s Subic Bay site some 2.500 kilometers away. Consequently, I intend to measure the social, economic and environmental impact of a particular case of intra-Asian offshoring by investigating both the company’s original industrial site and its target community. Rather than proposing two research sites to make a comparative study, however, I shall focus on the relational aspects that connect Busan and Subic Bay, which together form one unit of observation for this multi-sited ethnographic field research that seeks to look into the social and cultural costs of one East Asian company’s geographical move of capital across a continent.
E-mail this page