The Good Life and The Oil Industry. Stories of «the good life» in Lac La Biche, Northern Alberta, Canada 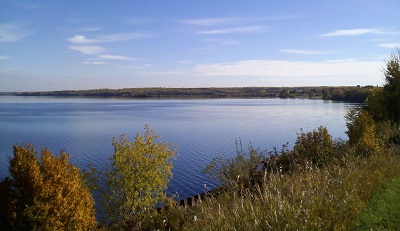 In my project I am looking into the influences the Alberta oil/tar sands industry has on the perception of how a good life looks like in the Lac La Biche county, Canada.

The oil/tar sands extraction takes place in the middle of the boreal forest and huge wetlands of northeast Alberta. This land was settled thousands of years ago and is a homeland to both First Nations and other Canadians. It is in the treaty area of Treaty 6, 7, and 8, which means on traditional lands of Cree and Dene communities.

Lac La Biche is the last town before the oil/tar sands. It is well known in the area for its long history as a former trading post and its beautiful nature. A provincial park, many opportunities for hunting and fishing and a golf course are just some of the attractions. The Lac La Biche County official motto “Welcoming by nature” seems to hint at both its natural environment but also to the history of cultural diversity in the town with Canada’s second oldest mosque. The closeness of the extraction sites holds the promise of prosperity and new chances, but also brings new challenges.

Alberta has the 3rd largest proven reserves of oil in the world and provides the USA with more crude oil than any other country, including Saudi Arabia, Mexico, and Venezuela. Migrant workers from all over the world are currently working in Alberta and the list of oil companies active in the oil/tar sands extraction is extensive. With the oil companies as the major income source of the Province of Alberta and biggest employer, local communities are very much dependent on them. The permanent stream of industry, workers and accompanying challenges has changed huge parts of northeastern Alberta socially, economically, and physically.

The Canadian oil/tar sands production is a very contested and controversial branch of the oil industry. Apart from the environmental impacts of the industry there is a debate about the legal basis on which the Alberta government awards licenses to oil companies. As the oil/tar sands extraction takes place on indigenous lands, indigenous rights activists see a direct violation of treaty rights if the industry prevents aboriginal groups directly or indirectly from living off the land. The Beaver Lake Cree, a First Nation situated close to Lac La Biche, fear that this is the case on their homelands and has asked for a court decision. The court case preparations and its surrounding debates will be one of the key events in this research.

The oil/tar sands production has a very high carbon footprint, impacts the ecosystems of its extraction areas highly and needs a large amount of water. Its effect on climate is one of the most controversial topics, and also its effect on the health and well-being of the local human and non-human population. The project will analyze how people experience uncertainties and/or awareness about health and environmental impacts. It will look into the connection between action, power and knowledge and how global discourses and movements are acted/acting locally. It will further scrutinize the interrelations between local communities, indigenous organizations, non-governmental organizations, oil companies, the media and the provincial administration of Alberta.

In the end an analysis of local responses and perceptions of the so-called three crises of globalization, namely of economic politics, identity formations and environmental and climate change will be given and supplemented by stories how a good life would look like for the people living next to and/or working with the oil/tar sands.